‘It’s an ill wind, etc’ and along those lines Canon picked up camera sales in 2016 lost by other camera companies due to the Kumamoto earthquake, according to executive vice president and CFO, Toshio Tanaka. 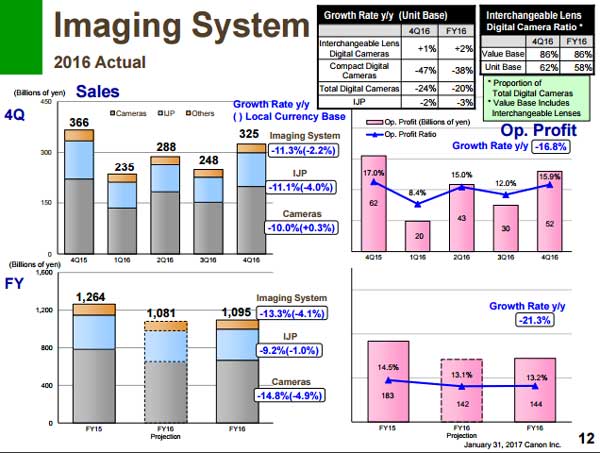 But while delivering Canon’s 2016 financial results, he also had a positive message for the entire industry in predicting that the worst of the decline in camera sales was behind us, at least as far as interchangeable lens models are concerned.

The interchangeable-lens camera market for the full year was down 9 percent, to 11.5 million units. ‘This represents the first time in three years that the market contacted at a single digit rate,’ Mr Tanaka noted – quite a good result in itself, and even better given the impact of Kumamoto.

‘As for our full-year unit sales, in addition to growing sales of new DSLRs and mirrorless cameras, we benefitted from the shortage of parts that impacted our competitors,’ Mr Tanaka candidly conceded. ‘As a result, our unit sales increased 2 percent to 5.67 million units.’

He went on to say that Canon had increased market share in all regions.

‘Bottoming out’
‘The interchangeable-lens camera market, from what we saw during last year’s year-end selling season, is projected to shrink by 4 percent to 11 million units, mainly reflecting decelerating contraction in developed countries.

‘We expect out unit sales to decrease about 7 percent to 5.3 million units, representing a steeper decline than the overall market. This reflects a one-off factor resulting from the Kumamoto earthquake.

‘Excluding (the Kumamoto earthquake) the year-on-year decline is slowing down and…we are heading towards bottoming out.’ 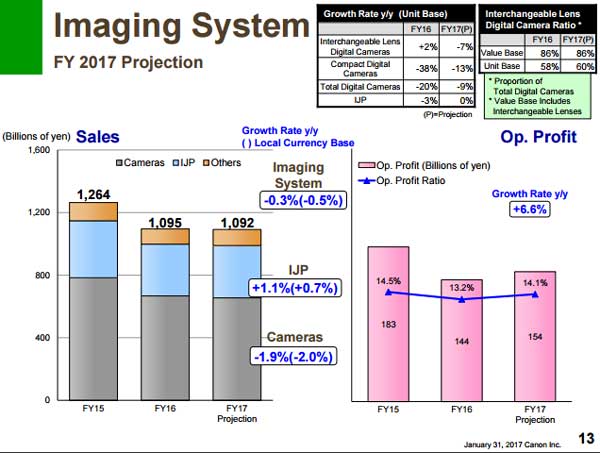 The magic word for Canon 2017 is ‘mirrorless’: ‘Using mirrorless cameras as a driver, we will work to acquire a new user base. At the same time, for advanced amateurs, we will extend our technological advantage to address users’ desires in terms of AF, video features etc. to promote replacement demand and link this to profitability…’

Compact cameras continue to be a basket case: ‘Last year the market declined by 44 percent to 15 million units due to impact from the shortage of supplies on all manufacturers, including Canon.

‘Against this backdrop, Canon focused energy on expanding sales of G series premium cameras which exceeded those of last year. Overall, however, our unit sales declined 38 percent to 40.4 million yen, due to a significant drop in entry models’

‘As a future outlook, we still feel more time is necessary before the market bottoms out…;’