Camera Electronic’s second Perth store and showroom, which opened its doors in early November on Murray Street, is aiming to attract business from the consumer and enthusiast market in the city’s bustling CBD.

The existing Stirling Street address, a larger space which covers primarily the professional market, will act as head office and a central warehouse.

‘Murray Street is really geared toward consumers and enthusiasts. We want to attract the office workers, tourists and CBD foot traffic, and also tap into some of the boutique King Street trade,’ Howard Frank, director of Camera Electronic, told PhotoCounter. ‘At the moment we’re experiencing mostly new business that we weren’t getting at Stirling Street. We’re seeing new clientele.’

The King Street precinct, around the corner from the new shop, has outlets selling luxury brands such as Louis Vuitton, Chanel, Gucci, Prada, and Rolex. It’s a destination for people willing to fork out serious dollars for bags, clothing and jewellery – and now, perhaps, photography gear.

Opening a second showroom is the biggest growth initiative Howard and his brother Saul have undertaken since being handed control of the business in 2008 from their father, Ron Frank, who passed away in December.

Since 2008 the brothers have expanded Camera Electronics product lines; opened Shoot Workshop, an affiliate education workshop and studio next door at Stirling Street; re-branded the business and its premises; and hosted the state’s largest annual trade show, Photo Live Expo, in 2015 and 2016.

But the most exciting – and rare – milestone for the photo industry is the new showroom. A totally new camera store doesn’t open every day!

It’s targeting untapped discretionary spending in the photo market. Additionally, Howard says he’s sure it will, and has, diverted customers away from competing online and grey market traders. And this has clear benefits for distributors and suppliers, many who attended the launch celebration earlier this month.

The Murray Street showroom is nestled among Perth CBD bars and cafes, and is surrounded by towering office buildings. It’s a stone’s throw from Perth Central Station and the Underground rail system, the city’s two major public transport systems.

(And the closest competing photo retailer is a Camera House on Hay Street, which shares its space with Lotterywest and a pharmacy, leaving it with limited shelf space.) 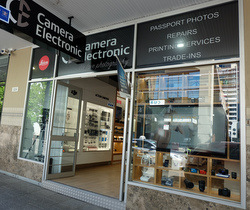 The Murray Street shop windows showcase popular consumer products, such as DJI drones and Fujifilm Instax camera, and inside customers can find a bit of everything from most popular consumer brands, along with a limited selection of pro gear.

‘We’re seeing decent lab and passport photo business at Murray Street. We have two small Fujifilm kiosks which can print up to A4. The Instax and action cams have been a lot stronger there (than Stirling Street). And consumer and entry-level DSLR, mirrorless and video cams are all doing nicely – so it’s a different market to Stirling Street.’

As Howard says, Stirling Street is a different proposition. While it’s technically in the CBD and only a five-minute drive from Murray Street, foot traffic is virtually non-existent. The windows are covered with graphics to keep Perth’s blistering summer weather outside, and only a handful of people stroll past the windows during the day.

It has loyal repeat customers – people familiar with Camera Electronic, which has been servicing Western Australian professional photographers for over 45 years.

‘At Stirling Street, they’re coming here for a purpose. We almost always record customer details, whereas there’s lots of people just coming through to buy something and moving on in Murray Street. Cash sales, if you like, that we weren’t getting previously,’ Howard said.

More shelf space at Stirling Street allows for a wider range of brands. Professional photographic gear from brands like Hasselblad, Profoto, Eizo, Epson, and high-end cameras and lenses from Sony, Nikon, Leica, Canon, Fujifilm, Pentax, Sigma, and Tamron sit alongside entry-level and enthusiast gear. All bases of the enthusiast to pro market are covered.

‘Stirling Street is our warehouse, and we can do multiple deliveries a day with no problems. It’s generally not an issue to have specific stock in-store within a couple hours,’ he said. ‘The office worker crowd can place an order on their morning tea break and pick it up at lunch or the end of the day.’

Howard said it’s important to have this option to stop people leaving empty-handed and then buying from B&H.

‘We keep heaps of extra stock upstairs. Probably more than most – after all, we’re all the way in Western Australia and arrivals can take a little longer to get here. Offering great customer service is one thing, but it doesn’t count if there’s a shortage of stock – especially if it can be found online.’ 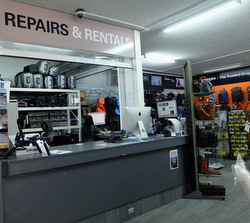 Howard says he and his brother considered opening the second showroom in other parts of the city, but the hive of activity around Murray Street was the best fit.

‘After spending a lot of time researching – speaking with people and businesses in the area, and getting a vibe for traffic in the area – as well as knowing the city and the market, we decided this was the best spot.’

Opening the showroom on the east coast wasn’t given much thought, but it could be in the pipeline down the track. ‘Never say never,’ said Howard. ‘We might explore that option in the future.’
– Will Shipton