Recent research from InfoTrends represents another nail in the coffin of dedicated camcorders, and not even the GoPro phenomenon can mask the decline in the category.

Gone are the days where people had only one choice to shoot videos – the camcorder. Today there is no shortage of video options available to people. Many people have a video camera right in their pocket – thanks to our always on-hand mobile phones. Digital cameras are increasingly capable of high resolution, image-stabilised video. Will these non-traditional video capable devices keep putting the squeeze on traditional camcorders? According to recent survey results, it would appear to be so. 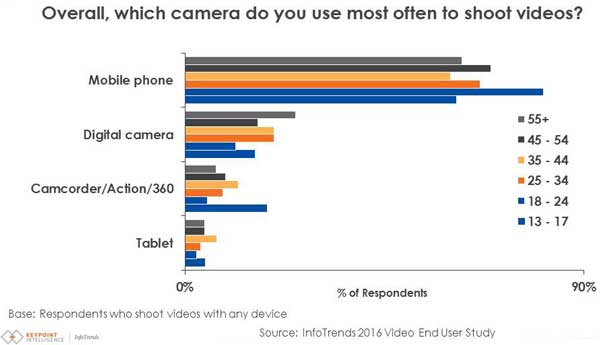 InfoTrends asked people who shoot video (with any device), which camera do you use most often to shoot videos? The most popular devices for taking video are mobile phones (66 percent), digital cameras (19 percent), and camcorders (10 percent). Tablets and analog camcorders were seldom used.

There was a clear difference in video shooting preference when looking at this question by age. Respondents aged 18-24 relied most heavily on mobile phones, nearly 81 percent saying they use the phone most often. Digital cameras were fairly popular devices among all age groups, but the 55+ group were most likely to say they use them most often.

What does it mean?

What it might mean is that dedicated video cameras, even those cool 360 degree and action/wearables, are being pushed aside for the all-around camera that is in almost everyone’s pocket. Will mobile phones replace camcorders? For everyday spontaneous video clips, they already have. Camcorders are still the best option for longer, planned, or special event videos. But for most consumers, capturing a video clip with their phone is just fine.

According to InfoTrends (that highly successful retailer of camera equipment!) camcorder retailers should be looking to the hobbyists and video professionals where a camcorder may still be the better choice for their video projects. (But really, InfoTrends, why would you risk being stuck with the inventory?)

‘Camcorders, mobile phones, and digital cameras can co-exist based on everyday versus special occasion use case scenarios,’ stated the report. (And world peace is just around the corner!)