After a new release drought and some financial challenges, GoPro is back with two new action cameras – Hero 5 Black and Hero 5 Session, and its first drone, the Karma. 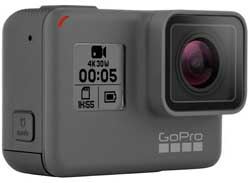 The two new Hero 5 cameras can auto-upload photos and videos to GoPro Plus, yet another cloud-based subscription service. It costs US$5/month.

The Hero 5 Black will be available on October 3 at a local street price of around $550. 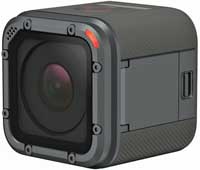 The cube-shaped Hero 5 Session is a beefed up version of previous models. It has virtually the same specifications as the Hero 5 Black except it generates 10 not 12 megabyte stills, and doesn’t have and LCD screen:
– Video Resolutions up to 4K at 30 fps;
– 10-megapixel stills;
– Auto-upload of photos and video to cloud when camera is charging;
– Voice Control with support for 7 Languages;
– Simple 1-Button Control;
– Waterproof (without a housing) to 10m;
– Electronic stabilisation;
– Wide-angle video and photos with new linear-view setting.

The Hero 5 Session will be available on October 3 with a street price around $460.

Good Karma?
GoPro claims the Karma features ‘a painless out-of-the-box experience unlike any other drone in the market’. 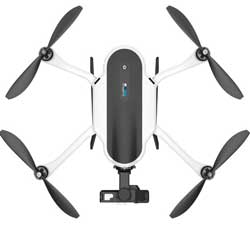 One of its design features is folding propeller arms, which make it far more convenient to transport. It is supplied with a backpack, rather than this being an optional accessory.

Unlike competitive offerings, it is offered without a camera and will have a local RRP well above $1000.  (US recommended price is US$800.)

The Karma features a removable gimbal that provides steady shots in the air but also has a stabiliser for smooth handheld footage on the ground.

It has a built-in screen on the controller rather than requiring the user to link the controller to a smartphone. The GoPro Passenger App allows another person to view your flight and control your GoPro from another mobile device.

Other features:
– A game-style controller features an integrated touch display;
– The 3-axis camera stabiliser can be removed from the drone and attached to the included Karma Grip for smooth handheld and gear-mounted footage.
– Around 18 minutes flight time