US moves on Print

The photographic community in the US, led by Professional Photographers of America (PPA), is banding together to promote the printing of photographs in an ongoing campaign dubbed The Print Movement. 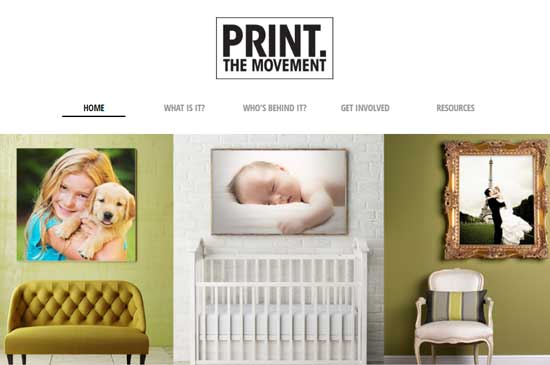 While the PPA’s primary objective is to encourage Americans to use the services of a professional photographer via The Print Movement material, it also promotes the printing of photographs more generally.

According to the PPA, over half the US population (53 percent) have not printed a photo in more than 12 months. Seventy percent do not have photos albums, and 42 percent simply don’t print photos at all.

According to the 2015 survey, 42 percent of people between the ages of 30 and 44 are likely to end up with no photographic record of their childhood, holiday get-togethers, relatives and friends, and 67 percent store their photos solely on a computer or phone – perhaps the most insecure among the various storage media.

‘Unless we change our ways, I think time will prove that we have gambled away our family histories – trusting too much in our ability to protect our memories on our phones, tablets and other devices,’ said David Trust, PPA’s CEO. ‘It is a failed notion that we will all pay for.

‘On the other hand, this unfortunate reality is giving PPA an opportunity to make a difference by creating a program that will help the public understand the importance of purchasing and creating printed photographs.’

The PPA has gathered together a group of around 20 companies, including Canon, Kodak Alaris, Canson and and Hahnemuhle, to support The Print Movement, which launches as an awareness campaign directed to the general public (aka ‘consumers’) to highlight the value in showcasing and preserving their lives or their families’ lives through photographic prints, albums, and all types of photographic displays.

PPA and its partners are providing resources to photographers in a variety of ways. Their website, printmovement.org, features pro photographer-oriented customisable brochures, marketing materials and videos showcasing the value of print. There will also be workshops and ‘related learning opportunities’ (wha?) at Imaging USA 2017, the PPA’s photography convention and trade show to be held on January 5-10 next year in San Antonio, Texas.