Sigma has announced its entrance into the cinematography market by revealing a new range of high-end cine lenses, two of which – an 18-35mm T2 and 50-100mm T2 zoom lens – will be available by the end of the year.

This announcement comes within days of Sony showing off its own flash new Cine glass, an E PZ 18-110mm F4 G OSS lens, priced at $5699. 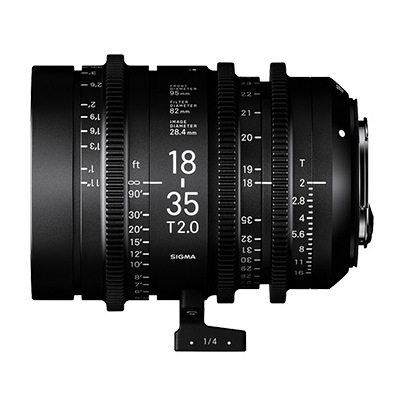 The two Sigma lenses will be released in Canon EF and Sony E-mount versions – an interesting move that suggests cinematography/videography is increasingly being done with full-frame stills cameras offering video, such as the Canon 5D Mk IV or the Sony a7 series, rather than dedicated camcorders.

Sigma said that it may rock the boat for the established brands in digital film production by bringing its competitively priced, high-class optics into the market – offering a ‘new solution’ for cinematographers.

The two zoom lenses will be joined by another zoom lens and five primes in 2017, with plans to develop further lenses and add support for PL-mount cameras systems – Arri 35mm and 16mm movie cameras, and Blackmagic cameras.

The new lenses offer a constant aperture throughout the zoom range, with optical performance designed for 6K – 8K high-res shooting.

All the lenses are based on Sigma’s existing core lenses for stills photography and are near the same size but with added weight.

Sigma has already provided details for the six additional lenses.

While no pricing is available as yet, Sigma said it will offer ‘unbeatable value’ with its Cine lenses.

Starting at an 18mm wide angle and ending at a 110mm telephoto, the lens maintains a constant f4 aperture for enhanced depth of field effects and stable exposure across the entire zoom range.

Sony said this lens will be an ideal fit for the a7 series (and a6300) cameras through to Sony’s dedicated broadcast quality camcorders, like the PXW-FS7. It is made up of 18 elements in 15 groups, including six aspherical elements and three extra-low dispersion glass elements.

It will be available from December. Click here for the press release.