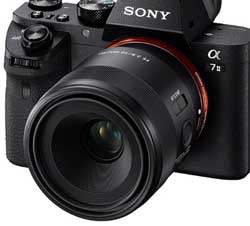 While the F2.8 maximum aperture is hardly ground-breaking, Sony says it ‘offers outstanding image quality and bokeh’. The 1:1 macro capability allows for get sharp close-ups.

Sony says ‘and the optical and mechanical construction of the lens has less flare and ghosting even without a lens hood.’

Cinema 4K from Panasonic HC-X1
Panasonic ‘is set to introduce’ the HC-X1, a professional-quality handheld 4K camcorder. It won’t be actually launched until December, but it’s reassuring to know all is at the ready! (Well, except perhaps for local pricing. In the US the HGC-X1 is US$3499.) 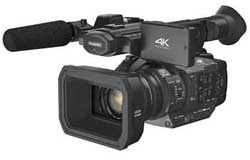 Professionals who travel and work in different countries can switch recording frequencies between 50Hz, 60Hz and 24Hz. Videos can be recorded in the MOV, MP4 and AVCHD file formats.

The 3.5-inch monitor built into the camcorder handle can be pulled out and turned vertically 270 degrees for easy high or low-angle shooting, and is supported by a tilting1.77 million dot OLED electronic viewfinder.

For shooting video outdoors or in bright light, there is a built-in variable ND filter with 1/4, 1/16 or 1/64 settings. For professionals who need more control, Gain and White Balance settings can be changed in camera and the HC-X1 is also equipped with a wealth of manual focus assist functions, such as MF Assist, One-Push AF, Expand/Peak, Focus Transition and Focus Area selection.

Snap on a ‘Blad
Motorola Moto Z smartphone owners can snap a (sort of) Hasselblad camera on to their phones for 10x optical zoom and RAW image files. 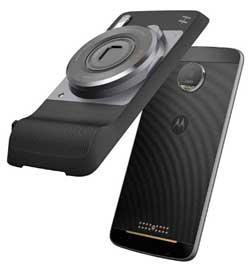 The Hasselblad True Zoom is one of several snap-on ‘Moto Mods’ for Moto Z phones which attach to the back of the phone. Others modules include 6w stereo speakers and a projector.

The attachment gives the phone the look and feel of a Hasselblad-branded compact camera, complete with a physical shutter button and zoom controls. A prominent lens on the front gives 10x optical zoom. It’s also equipped with a Xenon flash.

The US$250 the attachment allows your Moto Z phone to shoot RAW photos, share them instantly with family and friends, and to have them automatically backed up for two years through Google Photos.

SD card-sized Wi-Fi adaptor from Canon
Canon has announced a new SD card-sized Wi-Fi Adapter W-E1. When placed in an EOS 7D SD card slot, it provides it with Wi-Fi capabilities such as easy transferring of images and MP4 videos, as well as use of the Canon Camera Connect App for remote capture of still images via a compatible smartphone or tablet.

The Wi-Fi Adapter W-E1 will be sold with the EOS 7D Mark II body as well as sold separately, and can also be used with the EOS 5DS and 5DS R as well as previously purchased EOS 7D Mark II cameras, following a firmware upgrade. When used with EOS 5DS and 5DS R cameras, the Wi-Fi Adapter W-E1 functionality is limited to the transfer of still images only. The W-E1 will support 802.11 b, g and n using the 2.4 GHz band.he Wi-Fi

The adaptor doesn’t store images. A CompactFlash card must be used in the dedicated CF card slot.