That’s a good 1
While the 21st century Nikon 1 didn’t have a massive impact on the photographic industry, 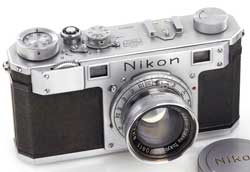 the original Nikon 1, from back in 1948, is still a highly-prized camera. So much so that one sold at auction this week for 384,000 Euros ($550,000), a world record for a Nikon. The camera in question is said to be the third production model of the first ever Nikon-branded camera. There were less than 1000 manufactured in total. The Nikon 1 featured a focal plane shutter with rangefinder focusing and a picture format of 24mm x 32mm. The world record was achieved at the 30th WestLicht Camera Auction in Vienna on 19thNovember. 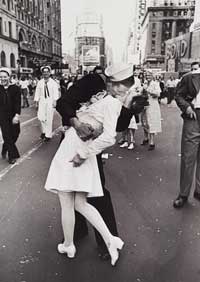 At the same auction, Alfred Eisenstaedt’s legendary V-J Day Kiss, with a reserve of 8000 Euros, sold for another record price of 48,000 Euro. The iconic image depicts a sailor kissing a nurse on Times Square during the celebrations of the end of WWII in 1945.

Copy that Google
Google has released PhotoScan, an app allowing smartphone users to scan photos. Google claims the app is superior to taking a photo of a photo, and is putting the app up as an alternative to professional scanning or using a flatbed scanner. The app takes four separate photos of the photo and stitches them together to eliminate glare and probably improve resolution. (Although Google isn’t saying what resolution it scans at). It’s not the only app of its kind allowing the copying of photos, but it’s the only one linked to Google Photos.

The breathless, unquestioning excitement with which most tech and even photo media talked this one up is a bit sad. Real people who have actually trialled it, rather than simply attending the Google dog-and-pony show, say it’s nowhere near the quality delivered by a proper scanner. There’s also a nagging issue which is blithely ignored: PhotoScan allows me to easily scan my photos. Or your photos. Say you want a copy of V-J Kiss but don’t really want to fork out 48,000 Euros, or some extra copies of your childrens’ school photos, but don’t want to fork out $30. PhotoScan to the rescue! Google and other large internet-based businesses like Getty have a vested interest in destroying the concept of copyright (unless it’s their own IP, of course). This is another small step in that direction.

Getty gets away with it
The case photographer Carol Highsmith brought against Getty Images for snaffling up over 80,000 images she had donated to the Library of Congress for public domain use has been thrown out of court.

Illustrating that old adage that the law has nothing to do with justice, US District Court Judge Jed S Rakoff dismissed her federal copyright claims in their entirety. Appaerently when you donate your work to the public, its Getty’s to do what they want with. But it’s a bit rich when they send letters of demand to the original creator of the work, which is what Getty did in this instance.

Carol Highsmith did settle out of court with Getty on a deceptive practices matter covered by New York state law.

For the latest installment in  the online copyright wars, click here. 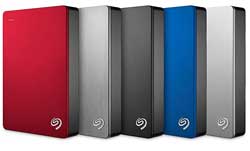 It retails for $259 – which is as a lot of gigs for the dollars. Hard disk drives are starting to fight a rear-guard battle against more reliable SSDs – solid state drives based on flash memory technology. SSDs are smaller, faster and less liable to failure, as there are no moving parts. HDDs are proven technology, cheaper and currently offer higher capacities. Ever higher capacity, smaller HDDs help them maintain an edge against what is likely to be their replacement technology.

‘With new product introductions…we can expect camera enthusiasts will continue to drive premium point-and-shoot sales this holiday season,’ said Ben Arnold of the NPD Group. ‘On the other hand, instant print camera sales, which carry a much lower price tag, are being driven not by the enthusiast – but by the technology’s ability to capitalise on the social nature of photography, allowing users to instantly share photos as soon as they are taken.’

Sony, Leica and Fujifilm were mentioned as driving premium camera sales, while Fujifilm is leading the market in instant print camera sales, followed by Polaroid. 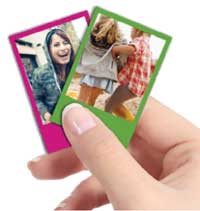 Polaroid Snap Touch incorporates upgrades including a 3.5-inch LCD touchscreen for framing shots and navigating the camera’s menu, an improved 13-megapixel CMOS sensor for higher-quality images as well as 1080p full HD video recording capability. All images and video are stored on a micro SD card (up to 128GB) to allow for sharing later.