Mountain of mounts for Cube 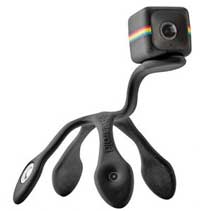 Polaroid has added a suite of six accessories and mounts for its Polaroid Cube lifestyle action video cameras.

The new accessories for the compact, 35mm square body of the Cube and Wi-Fi enabled Cube+ take advantage of the cameras’ built-in magnets. They include:
Cube Eye Mount. Build with a strong suction cup, the mount adheres Polaroid Cube action cameras to glass or other smooth surfaces.
Cube Plate Mount. Allows users to mount their Cube or Cube+ to almost any flat nonmetal surface. Ideal for a car dash, shelf, table or desk, the adhesive offers hands-free filming. With integrated magnet mount.
Cube Flexi-pod. Five legs in flexible stainless steel wrapped in silicone. Nonslip dots and metal mounts for the camera’s built-in magnets help ensure a secure hold.
Cube Sticky Mount. Developed to work with the Cube’s waterproof case. The base includes double-sided self-adhesive for attachment to nearly any flat surface, such as surfboards and other sports equipment.
Cube Shot Glass. Users can attach the Cube to the glass to capture gatherings and parties from a completely new point of view.
Cube Magnet Mount. This mount turns the Cube or Cube+ into a selfie camera. It fits all standard ¼-inch 20 tripods or monopods.

Available in Australia in the fourth quarter.

This will Change your Life! (Warning – clickbait)
A team at Harvard University has designed a lens which is around 100,000 times thinner than an equivalent glass lens.

It’s constructed from titanium dioxide ‘nanofins’ and is microscopically thin (600 nanometres) and can apparently focus on features smaller than the wavelength of light. So a bunch of journalists with minimal understanding of nanotechnology or optical science hail it as a game-changer and begin telling us all – with unjustifiable degrees of certainty – about all the exciting new applications for the technology – jusdt areound the corner. It’s the phototechnology equivalent of the ‘cure for cancer’ stories which crop up in the popular press every few months.

One application which DPReview has identified as making the World a Better Place is smaller virtual reality headsets. ‘…another potentially huge application is…virtual/augmented reality and wearable optics in general, where the size and weight of today’s headsets is a major obstacle to mass adoption. Display technology actually utilises narrow wavelength R, G, and B primaries, mixing them in just the right ratios to trick your eye/brain into perceiving the intended color. Small, flat lenses that can focus these primary colours with very high precision, aberration-free, might just open up a world of high-resolution and practical VR devices.’ Sounds convincing. – And you won’t even have to take your propellerhead cap off!

Vote of confidence for BJP
Late last month the venerable British Journal of Photography (BJP) set out to raise £150,000 in a crowdfunding campaign. Contributions today sit at over £400,000, with 20 days to go. 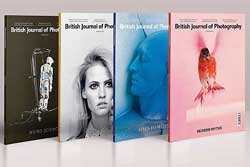 The BJP, along with professional and enthusiast publications dedicated to photography all around the world, are suffering from a withdrawal of support from advertisers – camera companies and the like – who are now sinking their marketing bucks into social networking frolics, brand ambassadors, online stores and interminable cashback (data harvesting) campaigns. Even though survey after survey indicates that independent online and print publications are number one or two when it comes to most trusted sources of information.

The massive support the photographic community has afforded the BJP should give suppliers (ie, potential advertisers) pause for thought. Lovers of photography love their specialist publications.

According to BJP the crowdfunding will allow its readers to participate in the growth of a magazine that started as a weekly trade journal in the 1850s and has grown into an international brand.

To find out more: bjp.photo/invest, or go to the BJP pitch page at www.crowdcube.com/bjp