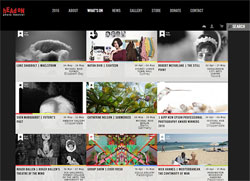 Head On kicks off
The 2016 Head On Photo Festival has opened in Sydney (April 29), with a wide variety of displays, workshops and other photo-centric events.

Run as a non-profit venture, the annual festival is dedicated to promoting the work of photographers at all stages of their careers, encouraging excellence and innovation, making photography accessible to all and raising awareness of important issues through photography.

It has earned a reputation of operating with integrity and providing all photo-artists invaluable opportunities to exhibit in Sydney and internationally.

Canon sponsors music/light festival again
Canon Australia has announced it is once again returning as an official supporter of the Vivid Sydney festival, month-long music and light event, for a third consecutive year.

It will transform the Museum of Contemporary Art to ‘Canon HQ’ from May 27 – June 18, with the Foundation Hall becoming ‘the ultimate hub for anyone… curious to explore new ways to capture and tell visual stories’.

Using the slogan ‘Be Light Curious’ Canon will host a series of workshops with Canon Masters, walking tours, helicopter tours, and much more. Some of the events are ticketed whereas others are free to attend.

Canon is taking this opportunity to show off and rent its gear to attendees, and will likely send any interested customers to SunStudios to purchase its cameras and lenses direct from the brand. 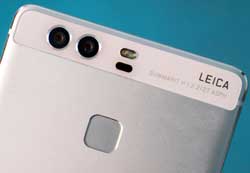 Huawei, a Chinese smartphone brand, attracted attention in February with its partnership with Leica, in which it was announced it would collaborate to design the recently launched P9 and P9 Plus smartphones’ 12-megapixel cameras.

‘Cameras’ because the P9 sports both a monochrome and colour sensor/camera unit, side by side.

It was implied that Leica developed and manufactured the camera, but it was later revealed that production was outsourced to Chinese company Sunny Optical Technology, which is ‘authorised’ by Leica.

No one detailed what the ‘authorisation’ from Leica meant exactly, and then speculation arose that the partnership announcement was a marketing ploy – Huawei gains some reflected glory from the Leica brand, and Leica gets some dosh.

Huawei then clarified Leica’s involvement, stating it was really and truly closely involved in the camera’s production after all. It said the P9 and P9 Plus were ‘co-engineered’ between Leica and Huawei, with the German optics company ‘deeply involved’ in the development of the camera. This includes ‘optical design, imaging quality, image data processing, optimisation, and the mechanical construction of the camera module to the graphic user interface’.

That simply had the sceptical observing that it wasn’t a joint statement with Leica.

Such a document eventually emerged, in which Leica and Huawei stated: ‘Our joint objective was to achieve the best possible image results and optical imaging performance in order to provide consumers in the smartphone photography segment with the best possible picture quality. The result raises smartphone photography to an entirely new levels. – And that’s a Big Statement. So far the reviews have been mixed.

For 13 years Canon ‘owned’ the APPAs (the ‘Canon APPAs)’ while more recently Nikon has owned the annual conference: The Nikon Event.

There was also something not quite right about Canon owning the professional photographer awards. It would be like Mercedes Benz or Ferrari getting naming rights for the Formula 1 Grand Prix series.

The divorce from Canon looked acrimonious. According to the AIPP, Canon split with the AIPP because it didn’t want to share the proposed new annual event with other sponsors – let alone its fiercest competitor, Nikon.

Canon, on the other hand, put its decision down to a disagreement on the proportion of its sponsorship money going to APPA entrants and winners: ‘Importantly, we have been determined to see as much of our sponsorship dollars as possible used to support the entrants and winners directly,’ wrote Canon Consumer Imaging director, Jason McLean. ‘Over recent years, though, this has been an increasing challenge as a result of the investment decisions and changing priorities of the AIPP administration.

‘These differences of opinion between us have limited our ability to provide the help that “professional” photographers were telling us they needed through the Major Sponsorship.’

– The fact Canon and the AIPP couldn’t get it sufficiently together to issue a joint press release with agreed reasons for the end of the sponsorship gives an indication that sponsor and sponsored weren’t seeing eye to eye.

‘Directly’ is the critical word in the Canon statement. Canon is increasingly disinclined to partner with industry associations and initiatives and more and more focussed on developing a direct relationship with end users – be they enthusiasts or pros.

Incite, which will be held at The Pullman Hotel (August 26 – 31) will combine three days of (not the Canon) APPA judging with workshops, seminars – and a few parties.

The conference component seems to have retained the name The Nikon Event. (It’s a bit confusing!)