Ricoh Imaging has announced the latest upgrade to its Theta 360-degree camera range, the Theta SC. 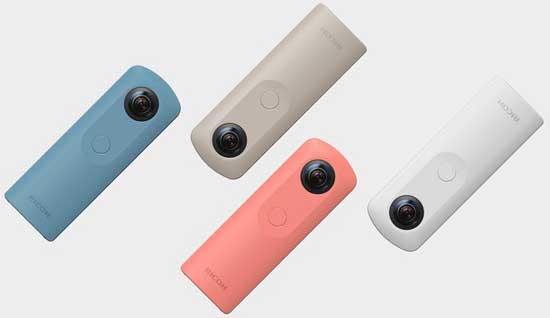 Augmented and virtual reality – along with somewhat connected drone market – seem set to be the popular new kid on the block this Christmas season, with every second IT article referencing this new frontier in consumer imaging, and a welter of new products being released. Ricoh, now on to its fourth generation of 360-degree cameras, is well-placed to exploit this burgeoning popularity.

According to Ricoh USA, devices required for augmented- and virtual-reality experiences such as 360-degree cameras and VR headsets will be at the top of consumers’ holiday 2016 gift lists.

The camera can be handheld with one-button operation or placed on a flat surface or tripod to be remotely controlled by a smartphone and the newly updated Theta S app. It comes in a range of colours.

The SC packs a 14-megapixel CMOS sensor and large-aperture (f2) dual lenses in a more lightweight package than the flagship Theta S. It records high-definition (HD) video clips up to five minutes in duration. Theta spherical images can be easily uploaded to the dedicated theta360.com website; posted and shared via Facebook, Google+, Google Maps and YouTube; as well as shared via Twitter and Tumblr.

Ricoh has also announced an updated, easier-to-use Theta S app for iOS and Android devices. The photographer can make a range of settings via a WiFi-synchronised smartphone or tablet computer, with a completely redesigned user interface that provides intuitive operation through a dedicated application.

A/NZ distributor CR Kennedy will begin shipping in mid-November. Price hasn’t been confirmed but will be around $450.