Canon USA has run a survey of amateur picture-takers which reveals that the perennial ‘Big Three’ photographic subjects –  family, pets and special occasions – have been joined by selfies and food photos. 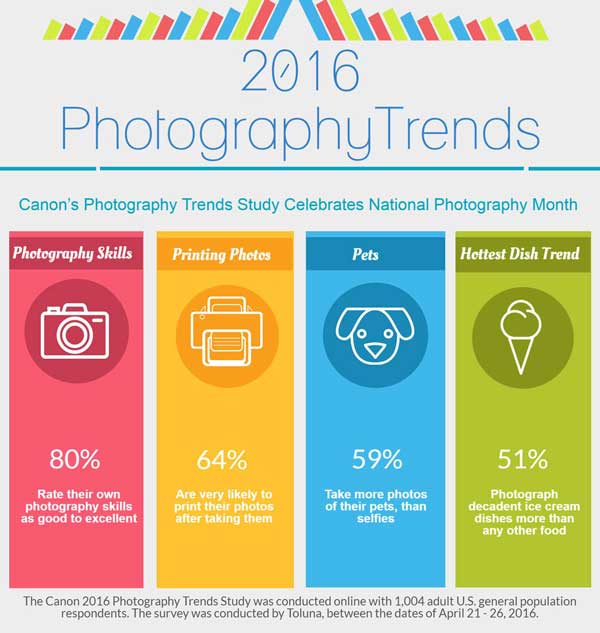 And people (aka ‘consumers’) not only like what they see when they gaze lovingly at their self-portraits. They also rate themselves as pretty handy behind the lens as well, with 80 percent or respondents rating their own photography skills as good to excellent, and 62 percent boasting that they think their snapping skills have improved in the past two to five years.

Nearly two out of three (64 percent) of those surveyed indicated that they are likely or somewhat likely to print (some of) their photos after taking them. Thirty two percent of those create scrapbooks or photo books, and one quarter use their prints to decorate their homes.

With more than 178 million photographs on Instagram tagged with #food, food photography continues to be a big trend among picture-takers. More than half (55 percent) take food photos to show off a personal creation or new recipe. More than one in four (27 percent) admit they share photos of food to brag and to give friends and family FOMO (‘Fear Of Missing Out’).

Other findings:
– One in four (24 percent) consumers are taking up to 300 photos per month;
– The majority (80 percent) are capturing photos during family gatherings and holidays;
– Only 17 percent are using their cameras to create video content to be used online, with video selfies also gaining popularity. Half of those surveyed are using their cameras to capture video of themselves.