CR Kennedy – the longest established Pentax distributor in the world – hosted the Australian launch of the flagship full-frame Pentax K-1 at the Overseas Passenger Terminal, Circular Quay, to a packed audience of specialist retailers and photo media on Monday, May 10.

Mr Noboru Akahane, president of Ricoh Imaging Company, flew to Australia to take part in the launch, underscoring the significance of the long-awaited camera in the company’s plans.

The K-1 will have a local body-only price of $2899. While initially slated for late-April release, the K-1 is in high demand globally, and is on back-order both here and in the US. 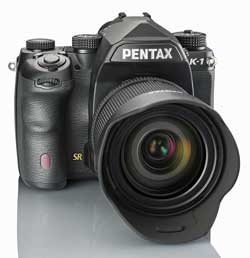 DigiDirect partnered CR Kennedy in the launch and was doing a brisk business through the evening taking orders for a ‘launch special’ with complementary Ona camera strap.

It is, of course, compatible with K-mount lenses from the film era – even with some AF assistance! The K-1 lets you use the aperture rings on old lenses and can give a focus confirmation beep with the central AF point, even with manual focus lenses. When a manual lens is used, the camera prompts you to manually specify the focal length so that image stabilisation can be tuned appropriately.

The camera has been greeted with universal acclaim from reviewers. It has scored five star reviews from ephotozine, Photographyblog and Camera Decision. DP Review rates its dynamic range as up there with medium format cameras: ‘.. the K-1 gives one of the best Raw dynamic range results we’ve ever seen, when shooting in single shot mode and absolutely outstanding results in circumstances where you can use the pixel shift mode. The multiple sampling of the same scene effectively gives a 2EV dynamic range boost, meaning it out-performs both the D810 and the 645Z by a comfortable margin.’

‘The camera is pretty nice,’ Australia’s leading camera reviewer, Margaret Brown (Photo Review Australia) told PhotoCounter. ‘It’s well built, with all the bells and whistles. It competes directly with the Nikon D810, and I think they both use the same sensor chip.

‘In that sector the K-1 offers a lot more functionality for shooting stills at a very competitive price.’

‘Under the hood’
The camera has a 36.4-megapixel CMOS sensor, eliminating the anti-aliasing filter for maximum sharpness. An AA Filter Simulator feature helps control the moiré effect from photos. Sensitivity is up to ISO 204800, and the new PRIME IV imaging engine allows for the capture of 14-bit RAW photos.

One of the more interesting features is a ‘Pixel Shift Resolution System’ (first seen in the Pentax K-3 II), which captures super high-res photos by capturing four images of the same scene by shifting the image sensor by a single pixel for each image, then synthesising them into a single composite image. Pixel shift combined with 36-meg ‘native’ resolution is going to deliver some incredibly fine-detailed image files. (Of course, the features is not so useful for moving subjects.)

Five-axis stabilisation the provides an equivalent compensation of 5 exposure stops. The AF system has 33 autofocus points (25 of which are cross-type).

On the back of the body is a 3.2-inch flexible-tilt 1.04-million-dot LCD screen – the first on any DSLR. The screen can be positioned at any angle both horizontally and vertically.

A Crop Mode lets users shoot APS-C-sized photos and use their APS-C format lenses. The camera detects the lens type and configures its settings accordingly.

The camera body itself is both compact and rugged. It’s weather-sealed, dustproof, and cold-proof thanks to 87 sealing points, allowing you to take the camera into harsh environments and have it emerge unscathed.