Pentax and Panasonic ‘most ethical’ 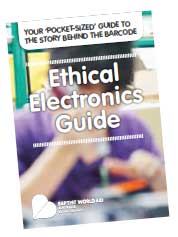 Electronics Industry Trends rates the companies on the practices and policies they have in place to mitigate the risk of forced labour, child labour and exploitation.

While two-thirds of companies showed some improvement since the report’s first release in 2014, not a single company scored an ‘A’. Several companies, including Apple and Samsung, were rated B+.

Canon (D+), Leica (D-) and GoPro (D-), clearly failed to make the grade, according to the report.

(It’s interesting –  and a little sad – to note that Dick Smith, now in receivership, was one of the outstanding improvers in the rankings, moving from D to B- with its controversial private label product range.)

‘Forced labour, child labour and exploitation remain as significant problems in the supply chain of the electronics industry. This is the most valuable industry in the world, worth in the trillions. If anyone can afford to ensure they have an ethical supply chain, it’s our big tech companies,’ said Baptist World Aid Australia advocacy manager Gershon Nimbalker.