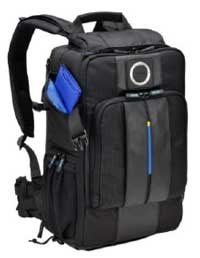 Good news for retailers is that the OM-D E-M1 Mark II is scheduled for December 2016 availability. Japanese camera industry website Daily Camera News reported last month that it would be in very limited supply until January, with delays due to the Kumamoto eathquake’s ongoing impact on Sony sensor manufacturing.

The macro flash STF-8 is dustproof, splashproof and freezeproof (-10°C). When combined with the dustproof and splashproof performance of the OM-D series cameras and an M.Zuiko lens, this macro system is suitable for shooting indoors or outdoors.

The CBG-12 backpack can store the entire Olympus OM-D E-M1 Mark II system with room to spare, and features a load distribution design for minimal fatigue when carried for long periods of time.