One of the real surprises at CES 2016 was Nikon’s announcement of its entry into the action camera segment with a 4K, waterproof, 360-degree, wearable camera dubbed the Nikon KeyMission 360. 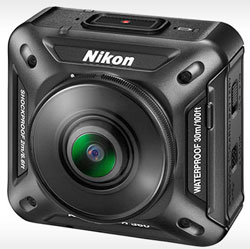 It is waterproof down to 30 metres and is resistant to dust, shock (2m), and low temperatures. It has digital image stabilisation to helps reduce camera shake.

Inside the camera is an image sensor (of unknown resolution), and lens on opposite sides of the device. When stitched together, the captured photo and video imagery covers 360-degrees.

No other details were supplied. Here’s a promo video with sample footage captured with a prototype unit.