Olympus has announced a new-generation action camera, the Stylus Tough TG-Tracker, which is waterproof to 30 metres, dustproof, shockproof from 2.1 metres, freezeproof, crushproof up to 100 kgs, and has a nifty location data-capture system 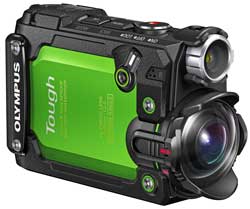 The ‘Field Sensor System’ includes GPS, a digital compass, temperature, barometric-pressure and accelerometer sensors. They can capture data like position, speed, water and air temps, altitude and water depth, and this can be read from the camera’s flip-out display or a smartphone app.

No local release dates provided, but it could be available in June. Likewise no pricing, but a published US MSRP of $350 would put it above $500 incl GST.