‘Photokina stands for the unlimited possibilities of imaging. Thanks to smartphones and tablets, new target groups of image enthusiasts are arising which we want to reach with the concept,’ said Katharina C. Hamma, CEO of Koelnmesse GmbH.

And Christian Müller-Rieker, the managing director of Photoindustrie-Verband, co-organiser of Photokina, is in furious agreement: ‘With the reorientation and the focus on future-related themes and strategic growth areas of the industry, we have set the course for the expansion and reinforcement of Photokina as a leading international show,’ he said.

As readers can see, the new colour scheme for the Photokina brand artwork is both unconventiional and high impact. The organisers call say the combination of red and cyan ‘lends the event a dynamic, fresh appearance.

‘The two colours contrast one another and generate maximum brilliance and colour effect through this contrast. The field of tension underlines the limitlessness of the “Imaging unlimited” claim.’

New features include Copter World and the Action Hall, which are fairly self-explanatory. 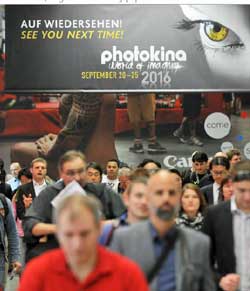 Moving images are highlighted via a short film festival and through cooperation with ‘influencers’ such as YouTube dude AlexiBexi.

But wait – that’s not all. The Photokina LightArt Congress 2016 (phoLAC 2016) will take place for the first time from September as a co-located event. in the context of Photokina 2016. The phol LAC 2016 is a cooperative event organised by the German Light Painting Union (GLPU) and the renowned light art photographer and artist JanLeonardo Wöllert and his team.