Lexar used last week’s CES event as a platform to launch and array of memory products ranging from super fast microSD cards through to its first portable SSDs.

Lexar’s announcement of affordable external SSDs (solid state drives) is particularly noteworthy. SSDs are the ‘next big thing’ in external storage, providing a combination of durability, portability, and speed to deliver dramatically improved productivity. Unlike external hard disk drives, there are no spinning disks or other moving parts. Instead, SSDs are an elaborate form of flash memory (a la memory cards and sticks).

There is an opportunity with SSDs for photo retailers to move further into the storage solutions market for professionals and photo enthusiasts (in this humble scribe’s opinion!).

In order of relevance to photographers and photo retailers the new products are: 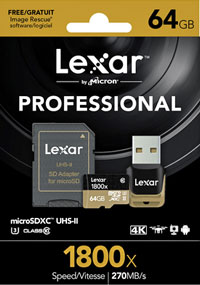 Included ‘in the box’ is a microSD UHS-II USB 3.0 reader for high-speed file transfer, and a SD UHS-II adapter for easy transfer between devices.

As with all Lexar Professional cards, a lifetime copy of Image Rescue software is included to recover any lost or deleted files, and each card is backed by a limited lifetime warranty.

The Lexar Portable SSD delivers a high-speed storage solution for professionals requiring the ability to quickly store and access data on the go. The compact and durable portable solid state drives have read transfer speeds up to 450MB per second (‘up to’ six times faster than traditional portable HDDs), making it easy to quickly access, drag and drop, or back up photos, movies, music and other files.

The SSDs will be available in 256GB and 512GB capacities at launch.

‘Driven by the demand for quick, easy, and mobile access to content, SSDs are being recognised as a key supplemental storage solution for everyday use by professionals across industries, including photographers and videographers,’ said a Lexar spokesperson. 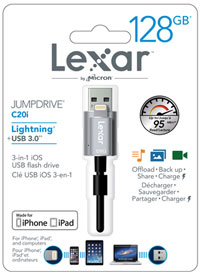 The Lexar JumpDrive C20i flash drive features two connectors –  Lightning and USB 3.0. The new flash drive is designed for the iPhone or iPad and lets users easily offload content, add storage, back up files, and charge iOS devices on the go, with no battery or network required.

According to research by Magisto, iOS mobile device users capture an average of 182 photos each month.

The JumpDrive C20i flash drive offers USB 3.0 performance with read speeds up to 95MB per second and write speeds of 20MB per second. It enables users to automatically and securely sync photos and videos, as well as back up files, with the use of a free file management app from the App Store. It is backwards compatible with USB 2.0 devices and is available in 16GB, 32GB, 64GB, and 128GB capacities.

It comes with a three-year limited warranty and has been thoroughly tested at the Lexar Quality Labs to to ensure performance, quality, compatibility, and reliability when used with a vast array of devices.