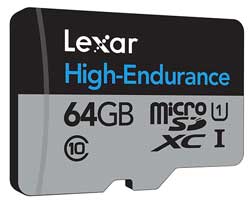 The ‘Works with GoPro’ verification process ensures that the Lexar Professional 1800x, Professional 1000x, and High-Performance 633x microSD cards have completed a vigorous testing process, and the cards are capable of achieving optimal performance and compatibility with GoPro products. The Lexar Professional 1800x microSD card, which offers transfer speeds up to 270MB/s, is specifically designed for the high-speed capture, playback, and transfer of multimedia files, including extended lengths of 1080p full-HD, 3D, and 4K video. These premium ‘Works with GoPro’ memory solutions provide the speed, capacity, and reliability needed to capture any adventure on the go.

‘Photographers who use GoPro devices are often capturing moments that can never again be replicated, from underwater shots to 4K mid-action footage,’ said Wes Brewer, vice president and general manager of the Lexar products group. ‘At Lexar, we understand the critical importance of having memory solutions that are not only high speed, but also reliable, so users can rest assured that their once-in-a-lifetime content has been quickly captured and stored efficiently and securely. We are thrilled to be among the first memory card manufacturers to be in the Works with GoPro program, and to offer our users blazing fast, professional-level microSD cards so they can make the most of their GoPro experience.’

In addition to the rigorous testing and performance verification provided by GoPro, all Lexar product designs undergo extensive testing in the Lexar Quality Labs, facilities with more than 1100 digital devices, to ensure performance, quality, compatibility, and reliability. The Lexar microSD cards detailed above have formally completed the full ‘Works with GoPro’ verification process and are avaiable this month.

20 years in storage
This year marks Lexar’s 20th anniversary. Originally established in 1996, and acquired by Micron Technology, Inc in 2006, Lexar has introduced numerous pioneering products, including high-speed memory cards, high capacity USB flash drives, and workflow-improving readers. With more than 80 patents, Lexar products have improved the digital imaging experience and the removable storage needs of students, consumers and professionals while forging partnerships that keep Lexar at the forefront of industry trends.

‘Now more than ever, consumers need dependable solutions to capture and store large amounts of high-quality content on the go,’ said Wes Brewer. ‘Lexar routinely partners with brands that offer pioneering technology that demands equally cutting-edge, reliable storage. We also prioritise working with camera and device manufacturers on a regular basis, to ensure maximum compatibility with our products.

‘Whether you’re using a JumpDrive to store large files before an important presentation, or using our Professional 1800x microSD with a GoPro action camera, professionals and hobbyists alike can feel confident that Lexar has worked tirelessly to ensure their storage solution is up to the task.’