Leica has announced the TL camera system which has a slight tech update and comes in a fancy new colour compared with its predecessor, the Leica T. 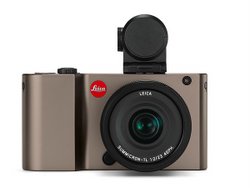 Despite the new Titanium colour option which has bevelled edges on the top and bottom plates, the silver and black TL body is identical to the T.

It has an improved autofocus, particularly in AF-C (continuous) mode, and a 32 GB internal buffer memory. The last distinguishing feature is added support for SL lenses with OIS, and use of R lenses with an R-Adapter L.

Leica has designed a TL app for Android and iOS which acts as an electronic viewfinder and allows remote control of shutter speed, aperture setting, as well as sharing photos by e-mail and social networks.