With a zoom reach almost three times that of the RX10 II, it does not replace the existing model but adds a large-sensor superzoom to the Sony premium fixed lens range, putting Sony, in sheer spec terms, at the vanguard of this lucrative niche

At 600mm it’s still able to open as wide as f4, making it a stop faster than the Canon PowerShot G3X while also being significantly longer than the Panasonic FZ1000, which runs to 400mm.

The camera has an OLED EVF with 2.36 million dots, as well as a tilting LCD. The body is dust and moisture resistant and Sony claims that its SteadyShot stabilization system offers up to 4.5 stops advantage.

There’s a focus on video shooting capabilities, with super slow motion video capture at up to 960 fps, an ultra-fast anti-distortion shutter with a maximum speed of 1/32000 second, high resolution 4K movie shooting and more.

‘The new RX10 III offers a true “all in one” package that will appeal to a wide range of amateur, hobbyist and professional photographers and videographers,’ said a Sony US spokesperson.

The wide aperture lens ‘differentiates it from many other high-zoom lenses that often struggle with light-gathering at longer focal lengths’ notes Sony in its press release. The aperture unit itself has nine blades that are designed to create a near circle in the f2.4 – f11 range, enabling photographers to create images with good bokeh, where the subject stands out against a softly defocused background.

With a minimum focusing distance of 72cm  and 0.49x maximum magnification at a fully extended 600mm, the new lens is also capable of producing detailed ‘tele-macro’ images. 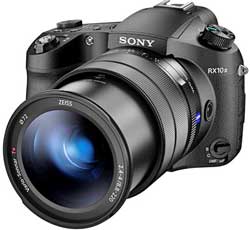 While there is no local release to match announcements in the US and Europe, the new Sony Cyber-shot RX10 III is likely to be available from May. US MSRP is US$1500 ($1965).