Kodak Alaris has opted to close its own colour paper factory in Harrow later this year and outsource all paper production to Carestream Health, formerly the Eastman Kodak health group.

Carestream Health has remained in Rochester, NY occupying part of the former Eastman Kodak manufacturing plant and offices, but it will manufacture paper at another specialist ‘contract coating’ plant in Windsor, Colorado. Carestream is part of Onex, one of Canada’s largest corporations.

According to Kodak Alaris, it has been splitting manufacture of Kodak colour paper between its own operations in Harrow, UK, and Carestream Health. Rather than bring all paper manufacture in-house in response to ‘market declines’, it has chosen to close its own facility, with the loss of around 10 percent (300) of its total workforce, and outsource to Carestream. 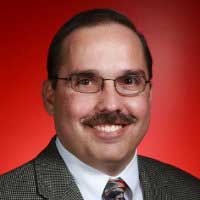 In a letter to customers, Dennis Olbrich, president, Imaging, Kodak Alaris (pictured right) wrote that the cessation of in-house manufacture will make Kodak Alaris ‘more competitive in the long-run’.

‘The people and facilities of Carestream Health have a long history of producing the Kodak-branded CNP products for us. In fact they are producing wider widths of these materials for Kodak Alaris today.

‘The proposed sourcing shift will not change finished goods in APR (Asia Pacific Region). We are committed to ensuring the delivery of products and services will continue without interruption.’

(IPS, local authorised distributor to the consumer and pro photo channels, announced its re-appointment by Kodak Alaris this week.)

Audrey Jonckheer, director of Worldwide Public Relations, Kodak Alaris’ Imaging Division, responded to a US photo news aggregation website which speculated whether the shutting of the Harrow plant was a sign of financial trouble by explaining that ‘…market decline has led to a partially-filled manufacturing factory and intense productivity pressures.

‘We will still actively participate in the CNP market – but will do so with a different supply chain.’ She did not explain why Carestream Health rather than Kodak Alaris Harrow was chosen as the new sole manufacturer of Kodak colour paper.

The Harrow facility produces some dye-sub media as well as silver halide paper. This will be transferred to another Kodak Alaris manufacturing plant.