JA Davey currently has a special offer on a kiosk solution consisting of a 21-inch touchscreen monitor and PC, along with PNI kiosk software, a DNP DS-RX1 dye sub printer and a receipt printer, at a discount of over 50 percent on list price. 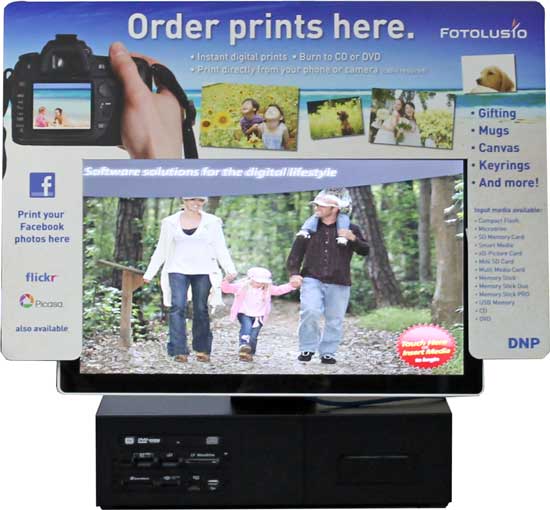 The set-up would have particular application in a photo specialist store as an instant print kiosk, or as a standalone unit in hardware-oriented specialist stores, pharmacy, newsagents and elsewhere, according to JA Davey director, Jon McBriar.

‘It’s not uncommon to have a kiosk out the front of the store aimed at the instant print market,’ he noted.

The DNP dye-sub printer would typically be housed directly below the kiosk. The customer places their order and a receipt is printed. They then pay at the counter and the staff release the order to be printed.

The instant print kiosk bundle including the the DNP RX1 printer is discounted to just $2500.

PNI kiosk software, used by retailers such as Costco, Walgreens, Walmart and Tesco on over 9000 kiosks around the world, also delivers retailers and their customers the option of offering third-party produced gifting products such as canvas prints photo books, photo mugs etc, from wholesale fulfilment centre Extra Film, which is also the Australian agent for PNI.

The PNI software also includes ID software that can handle passport photos to conform to a wide range of national passport standards.

Custom logos can be developed for retailers wanting their own branding for the kiosks.

The kiosk will accept all commonly-used digital media from microSD card through to CDs and DVDs, and alternatively connects direct to smartphones via cable.