Some travelled far to attend, including Alex Christianian, who heads up Mike’s Cameras, a multi-generational photo retailing business in the US, and Saul Frank, who works with his brother Howard running Camera Electronic in Perth, yet another family photo business handed down from their father Ron. Malcolm Kennedy, head of CR Kennedy & Company, itself 82 years and three generations old, was also in attendance. (It’s worth noting that these two families have been doing business together since the 1940s!)

Stuart Holmes from Independent Photo, and the allegedly semi-retired John Swainston were among the contingent who flew down from Sydney for the event.

‘The Michael family have brought us sunshine and happiness for 100 years,’ said Craig Ondarchie MP, who has been a Michaels customer since he was 16. ‘It’s a part of what makes Melbourne the most liveable city in the world.

‘Thanks for a lifetime of memories you have given us.’ 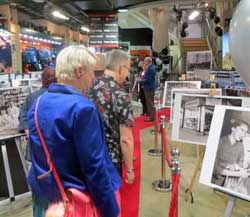 Next speaker was Terry Lane, photography writer for The Age and the SMH, who quipped that his family’s purchases at Michaels over the years had paid for most of the new developments in the store, said there was no mystery in Michaels’ success over the years: ‘ It’s the best product, at best price, with best customer service.’;

He said that Michaels preparedness to go that extra distance for its customers over many years is ‘why a company survives for such a long time. To run a business generation after generation for 100 years is an audacious act.’

Peter Michael spoke briefly and with pride on his family’s accomplishment and noted that the business always strove to innovate . Among myriad firsts he cited offering same day film processing in the 1930s – well before the advent of minilabs!

‘We’ve been looking after needs of Melbourne photographers for a long time,’ he said.

The initial connection with photography came about because photographers sourced their photographic chemistry from pharmacies and the Michaels – third-generation Alan and before him is father Harold, were pharmacists.

In the early 1950s there were post-War import restrictions on the mainly German brands Michaels sold at that time, which reduced the camera business to just 11 second hand models in the store window. The photographic side of the business experienced good growth in the late 1950s when Japanese camera makers entered the industry with affordable, innovative products.

It was in 1975, however, that Alan Michael made the decision to transform Michaels from a pharmacy and camera store to a specialist camera store. He was concerned about the move of supermarkets into pharmacy products and the onerous restrictions imposed by the Pharmacy Board, and ‘he loved cameras and loved trading in cameras.’

‘It was a very courageous, a very momentous decision in 1975 to change from pharmacy and camera store to camera store only. He did an amazing job. He transformed our business from 11 cameras and being very small in the photographic industry to the largest single camera store in the Southern Hemisphere.’

Peter than revealed that the fifth generation of the Michael family, represented since 2006 by his daughter Carly, will be consolidated when her brother David joins the business by the end of this year.

He acknowledged and thanked Carly for organising the event. Carly had a speaking as well as an event organising role, both of which she performed with professionalism and style.

One of the highlights of the 100th anniversary celebrations is a fascinating and comprehensive photographic display telling the Michaels Corner story through all its iterations – from gunsmith to pharmacy to state-of-the-art photographic retailer. It will remain on show for several months and is worth a look for anyone interested in the history of Melbourne and Australian photo retailing. The images prove the pricelessness of family photographs.

‘These images have been passed on through the Michaels generations. You can really see the benefit of taking and keeping and preserving family photos.

‘No amount of words could possibly describe the images you can see here. It’s not just the buildings and the times but the people – our five generations. 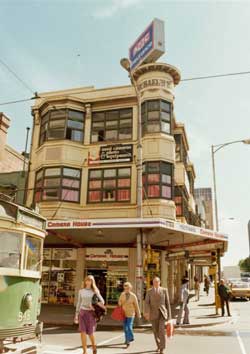 ‘We are very blessed to be in a wonderful industry.’

John Swainston also spoke briefly, concluding by emphasising the exquisite rarity of the Michaels family achievement in reaching the 100 year milestone: ‘Reaching 100 in life is rare. Reaching 100 in business is even rarer. So rare, in fact, that I could find no statistics in Australia to mark this rare occurrence. But in the USA, where there are stats for everything, it is said less than .01 percent of companies have made it that far.

‘Peter, Carly, your families, your team – congratulations. One hundred not out is a damned good score.’