One of the first booths I visited on opening day was Epson. Immediately I encountered the bright faces of Rob Voysey and David Slade from IPS. This is a good news story of Australian software invention, with the IPS Imageflow workflow management software, aimed at volume production markets such as schools and event photographers – but scaleable to smaller operations –  a major feature on the Epson stand. 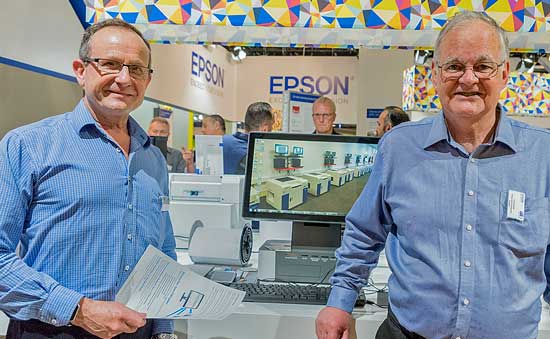 Rob told me that in the opening minutes of the show they had been approached by a major UK prospect which they rated as a perfect audience for this kind of software, and that they were very interested in pursuing a series of licences for their operations.

IPS’ technical guru David Slade, who developed the software in Melbourne, stated that the small-installation version of the software, Imageflow Express, could drive a 3-unit Epson SureLab minilab system with optimal workflow all up for under A$20,000, or even less if just two Surelabs were employed.

I asked Rob if the offering would enable a new market for print:

‘We see a new layer of retail provider being able to take advantage of the small footprint and their role in the community; that might not be the traditional photo outlet but other retailers seeking a new revenue stream to adjust for other changes in the retail services business,’ he said.

Click here for the full story on IPS Imageflow at Photokina.
– John  Swainston