Another Camera House to DigiDirect

DigiDirect has confirmed it will open its seventh camera store after acquiring the business and premises of Gerry Gibbs Camera House in Cannington, approximately 12 kilometres from the Perth CBD. 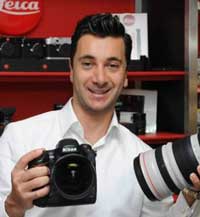 This move represents owner Shant Kradjian’s first foray away from Australia’s eastern seaboard, and gives DigiDirect a presence in WA.

‘It has always been part of our plan to establish a WA presence for DigiDirect…We can now truly identify as a national company,’ said Mr Kradjian (pictured right).

He said he had commenced discussions with Gerry and his son Murray Gibbs prior to the liquidators being called in, and was confident DigiDirect would succeed where Gerry Gibbs Camera House had failed, leaving debts of at least $1.3 million.

Why? Low operating costs and a superior ‘clicks and mortar’ strategy, he told PhotoCounter: ‘Our cost to market is low. For example our running costs can be amortised across seven stores – no need for extra expense in website, accounts, purchasing, etc,’ he said.

‘And our “clicks & mortar” strategy is the best in the industry!’ He said that there was a weakness in the Camera House model in that it ‘forces any retailer that understands the importance of an online solution being replicated in store to abandon that strategy and hence you see two pricing strategies and two brands in the one location.’ (The Gibbs’ also operated the mainly-online business ‘Gerry Gibbs Camera Warehouse‘ from the Cecil Street, Cannington premises.)

DigiDirect has re-employed Murray Gibbs and his staff and plans to commence trading under its banner from next week (August 15), with a grand opening to follow.

The new WA store joins DigiDirect outlets in Melbourne CBD, Sydney CBD, Bondi Junction, Miranda, Chatswood and Brisbane (QLD), along with its web business, DigiDirect.com.au, based out of Melbourne.

The Melbourne CBD outlet in Elizabeth Street was also part of the Camera House chain until it was acquired in not dissimilar circumstances in 2013. The Brisbane CBD Camera House store formerly owned by the late Rainer Seemann is also now a DigiDirect outlet.

For a report on the Gerry Gibbs Camera House liquidation, click here.