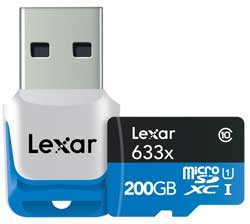 ‘Professional and everyday photographers are now more passionate about shooting high-quality video, on everything from digital SLRs to sports and aerial cameras,’ said Micron Consumer Products Group Marketing Manager APAC Mathew Luu. ‘With the Lexar 200GB microSDXC UHS-I card, photographers can continue to capture and store large amounts of content on the go, without having to worry about running out of space.’

The 200GB Lexar High-Performance 633x microSDXC UHS-I card comes with a USB 3.0 reader, which allows for high-speed file transfer of photos and videos from the card to a PC or Mac. The reader is also backwards compatible with USB 2.0 ports and comes with a one-year limited warranty.

The new card is now available in Australia and New Zealand for A$194.95 and NZ$209.95 respectively, cards reader included.

A memory card is perhaps the most common accessory when purchasing a camera. Faced with the increasingly confusing string of letters and numbers which define card performance, many people simply find the cheapest card, or the one recommended over the counter by a clerk, but they could be doing themselves and the potential performance of their new purchase a massive disservice.

The alternative to that is trying to estimate the capacity and performance levels they’ll need on the spot – but they might not really know what memory card is best for them.

With the Lexar Memory Card Selector – which can be easily brought up on screen to assistr store staff as well as custromers – it’s a three step process, and you don’t need to know the difference between a card with a 1 inside a U or a 6 inside a C, or whether you need 1000x or can get by with 633x. (Sheesh!)

Memory card designation is an unholy mess. The Lexar Card Selector cuts to the chase. 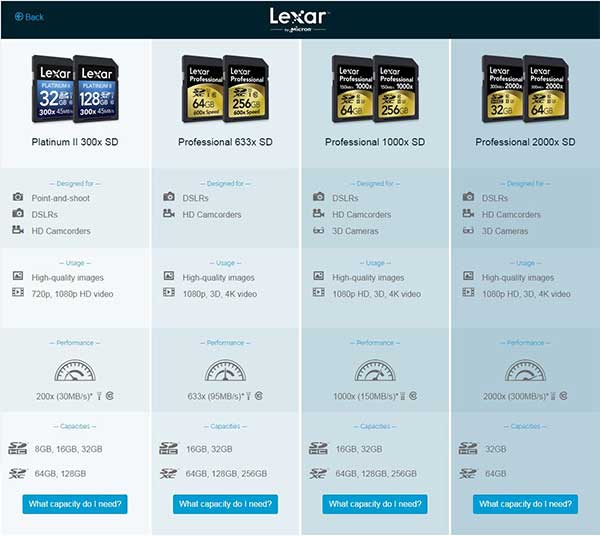 1. Visit the selector page, and start off by choosing the type of memory card – microSD, SD or CF.
2. Once selected, the page displays the different memory card types available from Lexar, the devices they’re designed for, the types of shooting they can handle, their performance levels, and their available capacities.
3. Click the ‘What Capacity Do I Need?’ button in the bottom of the column of the card, which takes you to the selector page that offers a number of customisable options to help determine how much image and video content the different card capacities will store, based on the megapixel count of the camera or device. For example, the 256GB capacity of the Lexar Professional 1000x SDXC card can store more than six hours of HD video and upwards of 14,000 photos if shooting with a 21-megapixel camera.

The user can slide the photo and video content icons back and forth along their capacity ranges based on their anticipated needs to find the card capacity that best suits them.

They can also select smaller megapixel counts, as well as different card capacities. Too much space for your needs? Select a smaller capacity to see how much content you’ll be able to store. Think you’ll be shooting more still images than videos? Slide your video icon to the left to see how much space is left for images.

By using this tool, store staff and customers can finally get a better idea of the cards that are best matched to the type of shooting they’ll be doing, while being matched to their camera or devices’ capabilities – without having to read the latest 40-page White Paper from the SD Card Association!