The local market is desperately light on for hard data, especially since the demise of PMA Australia and the withdrawal of IDEA from that kind of activity, so when leading photo magazine and website Photo Review Australia conducts an annual survey of its largely enthusiast readership, here at PhotoCounter we are keen to share what we can with the specialist retailer community! 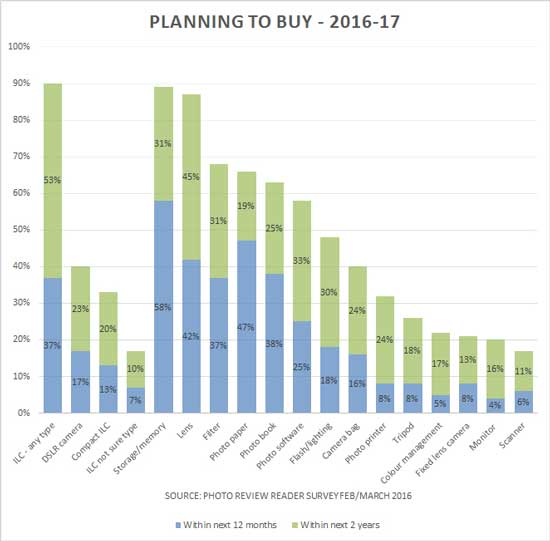 The survey attracts a good response – around 3 percent of the large Photo Review reader email list, which gives the results some vaildity. Publisher David O’Sullivan notes that after about 100 responses are lodged, the results tend not to vary greatly, indicating a level of consensus among the respondents, who classify themselves mainly as mid-level enthusiasts (57 percent), with 29 percent classifying themselves as Advanced, including pro or semi-pro.

And the trends are good! Last year 66 percent of respondents said they ‘buy photographic gear regularly at a photo specialist shop’. This year that’s up 71 percent .

‘Overall, the results are encouraging for the photo industry,’ noted David O’Sullivan, ‘with a strong level of planned purchase, especially for interchangeable lens cameras, lenses, storage/memory, filters, and photo books.’

Ted’s is a clear winner in terms of word-of-mouth recommendations by the Photo Review survey respondents, followed by Digital Camera Warehouse. Camera House, trails into third place, just in front of Michaels with its one store, which is line-ball with DigiDirect.

The good news is the B&H sweatshop is towards the bottom of the top 10, while local parallel importers fare worse, and poor old Harvey Norman with one nomination beats beats JB Hi-Fi with none!

PhotoCounter asked for a new question to be included this year: ‘Why don’t you print more of your photos? Here are the responses:

A significant minority seemed to be relatively happy with their level of printing, with most comments along the lines of ‘I only print my best shots, or I don’t print more because I’m happy with the amount I currently print.’ Fair enough.

A bit wasted
The survey also indicates that some of the larger suppliers need to reconsider where they are targetting marketing communications resources. Social media, ‘brand ambassadors’ and PR consultancies that don’t connect with the specialist media are not delivering the industry a decent bang for its buck. As part of a retailing ‘ecosystem’, we all suffer when marketers make the wrong marketing decisions. 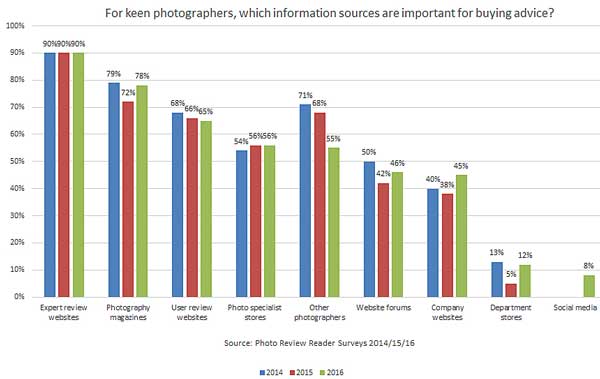 The SMH reported last week on a lecture to the Australian Association of National Advertisers (AANA) by Mark Ritson, Professor of Marketing at Melbourne Business School. He argues argues that Twitter, Facebook and Instagram are massively over-rated by marketers, who are rejecting traditional media at their peril.

‘If any marketer comes to me with a social media marketing budget I know they are an idiot, and poorly trained,’ said Professor Ritson.

‘It’s symptomatic of the culture we have created that marketers themselves are reticent to investigate social media in any more detail than saying “digital is the future”.’

One of the largest changes from the 2015 survey was that ‘Other Photographers’ have slipped as a source of buying advice from 68 percent to 55 percent. David ‘wondered out loud’ whether the proliferation of brand ambassadorships might have undermined the credibility of photographers as a trusted source. (Is there any photographer of note who isn’t being paid to spruik one or multiple brands of camera, lens, camera bag, memory cards and the like?)

And by the way, 65 percent see photo specialists stores as important for buying advice – same figure as 2015. Perhaps the suppliers should appoint retail stores as their ‘brand ambassadors’!