Centre for Photography no longer centered

After over 40 years, the Australian Centre for Photography (ACP) at 227 Oxford St, Paddington is moving this month, with its various functions split up and moving to venues around the Paddington/Darlinghurst area. 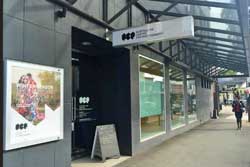 Administration offices will be at 66 Oxford Street, in something called City of Sydney’s Creative Spaces.

Workshops are moving to the National Art School Ltd, on the corner of Forbes and Burton Streets, Darlinghurst.

The ACP is yet to announce a new gallery space. There is no news on relocation of the ACP’s studio spaces or library.

The property was sold in October, 2014 for just over $5 million and until July this year was leased back from the new landlord. The original plan was to move in 2015 to location close to a railway station, ‘in order to genuinely perform our role as a national centre for photography’, as the press announcement stated.

Proceeds from the sale were be invested pending the lease or purchase of a new home for ACP. It doesn’t seem like these plans came to fruition.

It all looks a bit sad: the ACP and the Sydney photographic community thrived by having a base from which to run dedicated (to photography) workshops and exhibitions. The new arrangements lack that sharp focus on photography and splinters the ACP into multiple venues – none of which can really be seen as a Sydnery home for photography, like the original ACP.

There’s a clearing sale this Saturday at which a shedload of gear from cameras to darkroom equipment to furniture will be on offer, and there are sure to be some great bargains. Click here for an idea of what’s available.