Canon Inc has achieved an increase in (consolidated) net sales of 2 percent, with operating profit down 2.3 percent, and income before tax down by 9.3 percent for its 2015 financial year (Jan-Dec).

The Imaging System Business Unit – the largest single entity in the photographic industry and therefore something of a barometer of its health – experienced a sales decrease of 5.9 percent, while operating profit declined 5.7 percent (¥183.4 billion.)

The Canon financial report noted a decline in the interchangeable-lens market due to ‘harsh conditions owing to currency depreciations in emerging countries and the slowdown in China. (No mention of Sony!)

On a more positive note for 2016, ‘there were positive signs of a recovery in sales in the US and Japan.

‘Additionally, sales have been strong for such models as the EOS 5DS and EOS 5DS R digital SLR cameras…As for digital compact cameras, while sales volume declined amid the ongoing contraction of the market, the ratio of more profitable high-added-value models increased owing to efforts to strengthen the lineup of PowerShot G-series models.’

Canon’s CFO Toshizo Tanaka also noted that Canon had increased its market share in the mirrorless interchangeable segment in 2015.

The table to the right underscores the reality that the market starts at the hobbyist and ends at the professional – the mass market doesn’t really count for much. While cameras accounted for 46 percent of units sold in 2015, it also accounted for 83 percent of the value (including lenses).

Most of the Imaging Systems sales decline was outside of Japan. In the home market a sales result pretty well line-ball with the previous year resulted in a net income inbcrease of 20.8 percent.

As for the overall outlook in 2016, the report continued, ‘US and European economies are expected to grow moderately thanks to expanding domestic demand as employment conditions continue to improve.

But there was an overall pessimistic tone to the 2016 forecasts, with China still seen as a problem due to the economic slowdown there. 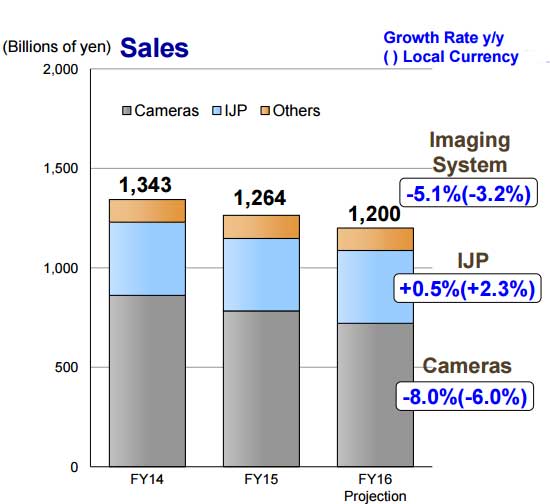 ‘Emerging economies, such as those of Southeast Asia, India, Brazil and Russia, are likely to face slowdowns owing to currency depreciations or declines in resource prices. Overall, the global economy is expected to face harsh economic conditions for some time.’