The store, at 250 Pitt Street, was previously a clothing outlet. A new camera store in the centre of Sydney is of course great news for the Trans and Camera House, but it is also a fillip to all photo specialists, as it enhances the channel’s profile.

‘I’m very pleased to have a new Camera House retail store in the heart of Sydney,’ said newly-appointed Camera House general manager, Charles Davey. ‘Chris Tran and his team bring a great level of expert knowledge to our Sydney customers to support their needs in photographics.’

‘I look forward to more Camera House expansion in the future,’ he said.

‘We had a RSVP set up through Facebook and in fear of not being able to cater to the influx of consumers, we had to close off the RSVP’s early,’ explained Chris Tran. ‘There was a total of 100 gift bags given away, which consisted of little goodies from supporting camera companies. We had in excess of 300 people walk through the doors, which was quite chaotic at times. 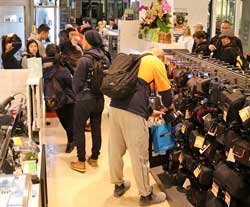 ‘On the night, we also had photo walks hosted by Nikon, Olympus and Canon, where consumers had the opportunity to touch and try different camera bodies and lenses. They could have brought their own gear or borrowed one from the brands. Consumers love the interaction from the photo walks and from the general feedback that we got back, the whole night was a huge success.

‘All in all, it was a great night had by all that attended. We do have plans to do more photo walks and have more consumer engagement,’ added Chris.