Sony Australia has announced March availability of its CES-launched Action Cam, the HDR-AS50, at just $299. 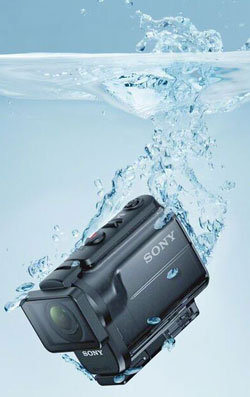 The Sony HDR-AS50 has an 11-megapixel (1/2.3-inch) back-illuminated CMOS sensor paired with an Zeiss Tessar lens (f2.8, 18.4-21.8mm). It uses Sony’s latest Advanced SteadyShot image stabilisation technology which Sony says is ‘three times more powerful than its predecessor’ and ‘delivers judder-free footage when shooting everything from motocross to aerial landscapes.’ The stabilisation system is claimed to be especially effective against low amplitude vibration, which can occur when used with radio-controlled helicopters or drones.

It comes supplied with an underwater housing which allows footage to be captured down to 60m. The housing is also shockproof, and, unsurprisingly, dustproof.

Then there’s a paragraph in the press release which is hard to translate back into normal English: ‘With the HDR-AS50, angle of view adjustment is now possible through ‘angle setting’ and ‘zoom setting’. Users benefit from two-step angle switching (Wide / Narrow. Wide angle only available when SteadyShot is off) between wide and narrow, allowing perfect frame adjustment of any scene with less image distortion for great quality, no matter what angle. (So you change from wide to tele and back again using a switch of some sort? Could be…)

The AS50 also features a 3x zoom (presumably mainly digital given the 18.4-21.8mm focal range). It takes stills at 11.9 megapixels (once again via some digital jiggerypokery, given the 11-megapixel sensor.)

A tripod socket has been introduced, eliminating the need for a tripod adaptor.

It can be controlled using smartphones and tablets and turned on and off when used with the PlayMemories Mobile app. The camera has a rear USB port allowing users to connect a cable when an accessory is attached to power it via a mobile battery, even while shooting.