What’s next for PMA Australia?

On October 15, friends and members of the PMA met at The Digital Show in Melbourne. Thanks to the team at IDEA, we were given a meeting room above the trade show floor, for a 3pm start. 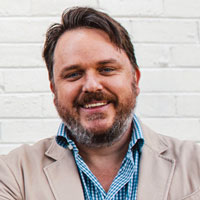 The intention of the meeting was to introduce the new PMAI CEO Georgia McCabe and her husband Scott Brownstein, to explain the structure of the PMA International, to look at the direction it was taking, and finally to consider what the PMA in Australia might do in 2016.

Close to 40 attended, and whilst it was dominated by past PMA members, there were some new to the organisation. Georgia explained that whilst the old structures of regional committees and offices has been shut down, there were still regional advisors working with the US office. Germany and the UK are very active, thanks to some supportive individuals.

I see the international connection as being a critical element of PMA. It was always the highlight of my travels to attend a PMA conference in America and not only learn from the attendees, but gain access to ideas and people executing them at the highest levels. Being exposed to such ideas has informed much of what we’ve done at Atkins, and at the bare minimum, it has given hope for a future in the industry.

The imaging industry world-wide is fractured, and there is a leadership vacuum. Once, Eastman Kodak and the other photo giants provided the rules and the territory, Scott in his presentation described how we are now “ancillary” to our own industry. We used to be the industry. The industry is now controlled by Apple, Google, Samsung, Amazon,etc. It has happened so fast.

One of the speakers at a recent conference jokingly said we (the photo industry) used to hold people’s pictures for ransom, we gave the photos back when they paid for the processing. Perhaps there is a grain of truth in this joke. Could it have been our arrogance that assumes the world still needs us?

In defence of these new giants (Apple, Google, Samsung etc), primarily they are guilty of finding out what the customers wants, given the limits of technology, and built that. Sure, they’ve monopolised and used confidence tricks on the public, but essentially they have built something pretty impressive that suits most of us consumers. Except perhaps for one thing…

…Their mantra is ‘more is better’, typical corporate thinking. Technology has allowed them to encourage us to photograph everything and anything, but not differentiate the pictures. They have created such a mess of photos, we will never find our ‘pictures that matter’ out of this landfill of photos. Photos of receipts, meals, carpark levels, pseudo-art, obscure the pictures that define our lives.

This isn’t a minor issue, it is big enough for one of the founders of the internet, Dr Vint Cerf, to come out warning of a ‘digital dark age’. There is a lack of leadership around our industry. It is made up of corporate silos, with little in between.

Standing back and looking at this mess, Georgia set up a conference for the new PMA called Innovation Now. It had a dual focus, firstly to celebrate industry members who had reformed to meet the new age, to share their story so we can learn and be led by their ideas. The second focus of Innovation Now was to engage these new giants.

Scott set about calling Apple, Google, Amazon, and a host of other ‘giants’. Using some impressive contacts from their past, Scott did get through. We had the head of Google Photo Bradley Horowitz and the head of Amazon Cloud services, David Pearson, as well as the head of Disney Photo, Ron Mauldin present at Innovation Now.

We were thrilled that they presented at Innovation Now, and more importantly, they wanted to return to continue the conversation. Perhaps this is the beginning of a inclusive industry, perhaps PMA can take up the vacant leadership position?

So where does PMA Australia fit into all of this?  PMA here in Australia, has always been important for connections, a place to discuss what is happening in Oz, a place definitely different from Europe or the Americas. We can provide forums to discuss what is working, what isn’t, and what Robbo is wearing on the golf course.

A low-cost PMA conference is currently being planned for 2016, where we can gather in a single stream show and hear and give presentations that will help us all move forward in this new era.

I have always enjoyed the trade show here in Australia, especially the opportunity to talk about what is on the floor with fellow PMA members. With IDEA maintaining this show as a biennial event, we can still meet there in 2017 and support this.

We need to meet with other Australian groups to have a presence at their events, perhaps PMA could meet at PrintEx, or other complementary shows.

If we can fund it, perhaps PMA should have a presence at the Home Show, and demonstrate how photos enhance living spaces. This particular idea was executed very well by Gaby Mullinex (PMAI President) at the recent DPReview/Amazon PIX2015 convention. Gaby built a lounge area decorated with photographs and surrounded by suppliers making things. The audience had come for the gadgets at PIX, but they were enamoured and inspired by the PMA lounge.

Amazon asked PMA to participate in its conference, and gave PMA the space. From all evidence, they valued having us there, they asked us back again for PIX2016! To me, this feels like an invitation to the future.

Without an office here in Australia, it will be difficult to make a lot of headway, but I think we can get great value from what PMAI is doing. PMA will find its way forward.

Cast your mind back to the PMA of old, going to the big US show felt like attending the greatest show on earth. I learned how to use Twitter from Apple’s marketing guru, Guy Kawasaki; I met the CEO of Blurb books, Eileen Gittins, and keep in touch with their SVP Bruce Watermann; I also helped a small store operator from South Africa locate some parts for his minilab. The PMA has always been about people, and you get out of it what you put in.

From the meeting at the Digital Show we formed a working committee. I asked for a show of hands of who was prepared to help run a small conference next year. Lawrence Horsburg, Phil Gresham and John Swainston volunteered. We will Skype shortly and look at our options for potential partnering, location and timing.

A big thanks to Lawrence, Phil and John for volunteering, thanks also to Keith Shipton for offering his communication vehicle, PhotoCounter to help keep in touch. It was lovely having Peter Rose and Barbara and Richard Bryan present, offering their support. Critical to the success of this first step is having over 40 people turn up, and many others sending positive messages, so thank you all.

It is sad we don’t have the office here in Australia, and massive trade shows of old that brought in the dollars, and we are not even 100 percent sure of where PMA is headed. But one thing I am sure of, what we were doing was not working. The industry is so fractured, everyone has been holed-up in their play pens. Perhaps now the industry is now bored with these new toys, and is ready to get back together for a game, all playing together for the same objective.
– Paul Atkins,
Atkins Photo Lab