Dan Mann, founder and president of The Mann Group, was one of the stars of the show at the recent IPIC2015 conference in Las Vegas, so PhotoCounter has delved into the conference podcast library – with thanks to IPI – to bring our readers a report on his first keynote address at the conference, ‘5 KPIs Every Retailer Should Measure.’ 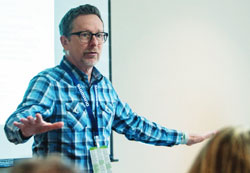 The Mann Group annually studies four key industries and tracks accumulative numbers leading to findings about retail profits, which formed the basis of the presentation.

Dan worked in the retail industry prior to forming the Mann Group in 2002, and has developed a ‘universal’ sales management program which he claims has boosted top lines sales by 17 percent for his 750 retailer clients in North America.

‘All this cycle of activity is going on and if you’re not paying attention, you will lose track,’ he said at the start of the presentation, comparing a failing retailer to the John F Kennedy Jr 1999 plane crash, where Kennedy piloted and crashed a plane after failing to notice warning signs.

‘If your not looking at the signs you will lose your way. Its very incumbent upon us in retail to track and measure…’

So, here are the five key measures, metrics and indicators Dan runs through – condensed from an hour-long presentation to a few hundred words…

1. Gross Profit
The first KPI is the most obvious and easiest to measure. Gross profit is a hard data calculation or evaluation of productive leadership – in other words the business owner, who should ‘drive sales, control costs’, is completely responsible for these numbers.

‘Not enough of us are focused on the top line sales number. We get buried on operations on our business sometimes, but the executive in charge has to drive sales and control costs.’

2. Payroll
– However, the focus is then placed on staff performance. Dan made the point that a highly-paid and skilled sales rep is in most cases a better pick than multiple unskilled minimum wage staff. In photo retailing this is particularly important, as having expert knowledge on consumer and professional-grade photographic technology can make a huge difference in sales.

He suggested measuring the productivity of each staff member by calculating the hours worked per week/salary against every single transaction the employee made during that week. This is best done by having staff members record each sale made at the cash register by swiping into the system and logging their individual sales.

Business owners generally have an idea of how many sales they’d like their staff to be making per hour/day/week, and must communicate this desired projected productivity and even implement ‘hourly productivity rate’ goals.

‘Quite frankly, the good people working for you want to know how they’re doing,’ Dan said. ‘There are quality employees who are achievement-oriented and have an achievement mindset – for them, they want to know they’re succeeding.’

He said that routinely telling staff how they are performing will give them a measure by which to understand whether they’re productive or unproductive. If the staff member proves to be continuously unproductive then certain measures can be taken to curb this, which include motivating the team or the individual; raising pay rates; or setting a standard and offering further training. – And if all else fails ‘removing low performers’. Of these suggestions, he preferred motivating the team or individual and offering further product training.

3. Inventory Turn
This is an annualised number that indicates to retailers how quickly a store is going through stock. And Mann says this is all about tracking a product’s ‘freshness’.

‘It’s a question of freshness. When inventory sits on your shelf for a year, what’s the message? It’s junk. The value (eventually) depreciates. It’s not desirable. The strategy for us is to create a product presentation that looks and feels desirable. It seems fresh.’

There’s a few ways this ‘freshness’ may be extended as items becoming increasingly unpopular. But it’s up to a retailer to assess why exactly the product isn’t moving.

He used the example of a fruit and vegetable grocer to make his point: When you visit the local green grocer there’s almost always staff replenishing the stock, which re-inforces the notion that what is on the shelf is fresh. Although it’s easy for shoppers to assess the quality of fruit and vegetable as it has a short lifespan, the constant daytime re-stocking is a sort of psychological strategy used to suggest the food is picked that day.

However, the other aisles at grocery stores require less demand for freshness and are re-stocked at night. So if product freshness is becoming an issue, boosting how ‘fresh’ it is perceived to be may assist in moving more units.

A product’s ‘staleness’ usually boils down to it being an unappealing product or one that’s losing its relevance, and staff have also lost confidence in it – which only makes matters worse.

‘Staff can kill a product – constantly reinforce to the staff that it is good stuff,’ Dan said. ‘If there’s a reason it is not good, mark it down. Mark down undesirable product. The longer and dustier, the less relevance it has.’

If all hope is lost, then marking down a product to achieve more sales but a smaller profit margin is preferable to keeping it at the same cost. Over time the product will naturally depreciate in value and the initial profit margin will be lost anyway.

Again, tracking these stats is fundamentally another way to evaluate the floor staffs’ performance. But this is far from being a concrete indicator, as one staff member may feel more confident or engaged selling an expensive professional-grade DSLR to a photography-savvy customer, whereas another may be more comfortable selling cheaper consumer products.

One attending retailer speaking from the floor pointed out that in his store, one of his staff members can easily sell an expensive camera, but another staff member who averages a smaller amount per transaction by selling accessories, averages larger profit margins.

5. Inventory Shrink
As time ran out, Dan rushed through the fourth point to cover number five – as he felt this was a critical KPI. He said that retailers must track the difference between the physical inventory and the inventory in stock (ordered and on paper).

If the physical inventory is lower than what should be in stock, based on units purchased, then stock is disappearing. This can partly be from customers stealing products or, a slightly more likely scenario in his experience – theft by staff members.

He said he has lost thousands of dollars from stock simply vanishing at the hands of staff.
He produced a statistic which says that 10 percent of staff wouldn’t steal, 10 percent would, and 80 percent ‘would if given opportunity or reason’.

‘This number, I challenge you to go look it up,’ he said. ‘Don’t take my word for it, read about it. This stat is scary. What’s a reason to take from you? There’s lots in their own minds.’

Justifications can include believing they aren’t paid enough, the boss is a jerk, or payback, revenge – whatever. There’s hundreds of reasons and ‘the reason’ isn’t what Mann is concerned about. It’s the opportunity.

‘Opportunities can be due to dis-organisation with no process or guidelines or procedures (in place),’ he says. ‘As someone who has run a lot of retail businesses I’ve had money stolen right under my nose.’

If a retailer is clumsy with operations and doesn’t track physical inventory, some staff members may take notice and successfully ‘tax’ products with no ramifications.

Tracking physical inventory will offer a retailer a prompt indicator of which inventory goes missing and when. Perhaps that product isn’t behind a glass screen and shoppers are stealing it – in which case boosting security will act as a disincentive. However if staff are responsible, an organised procedure for tracking inventory will, at least, narrow down who the potential thief may be and discourage future ‘opportunities’. And allowing staff members to know there is an awareness of internal theft will drive the message home that there is no opportunity to steal.
– William Shipton