Europe’s largest tech show, IFA in Berlin, was not a hotbed of new photographic product releases, but a couple of interesting niche market cameras were rolled out among the various wearables and 4K TVs and water-cooled laptops and sleep trackers –  the Ricoh Theta S 360-degree and the latest Polaroid camera-printer hybrid, the Polaroid Snap.

It offers three captures modes: colour, black & white, and Polaroid Vintage. Photos can also be printed with an optional Polaroid Classic Border Logo. Consumers can shoot new images even while the Polaroid Snap is printing.

Additionally, the camera features a self-timer for those all-important selfies, and a ‘photo booth mode’, which takes six images within 10 seconds.

‘The Polaroid Snap puts a modern twist on classic Polaroid instant cameras by combining digital camera technology with a contemporary, minimalistic design at a price point consumers would expect to pay for an analog instant camera,” commented Scott W. Hardy, president and CEO of Polaroid.

The camera will launch in Australia, along with the US and the UK, in the fourth quarter in a range of colours. Australian RRP is set at $199.95. 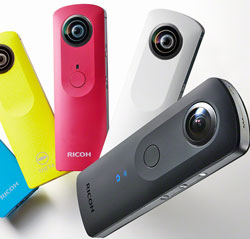 The Theta S also has twice the built-in storage (8MB) of the previous model. Maximum recording time for spherical video in full HD is 25 minutes.

To cope with the wide dynamic range usually encountered in spherical views, the Theta is capable of analysing multiple frames and performing HDR processing to improve exposure levels.

Built-in Wi-Fi has been speeded up and HDMI output is provided for live streaming. A companion app now offers a live preview.

Google’s newly-upgraded Street View app will recognise the camera. Three-sixty-degree images can be recorded and uploaded to Street View within the new app.

The Ricoh Theta S will be available in the US in late October for US$349. Google’s new Street View app is available immediately for iOS and Android. Distributor CR Kennedy has confirmed that it will be released in Australia but there is no RRP as yet.