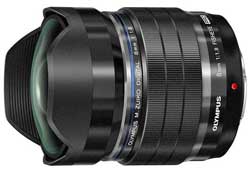 Olympus says the 8mm f1.8 PRO (pictured right) is ‘the world’s brightest fisheye lens’, while the 7-14mm f2.8 PRO is a professional-grade ultra-wide zoom with a fast constant aperture.

The 8mm f1.8 PRO lens is targeted at photographers with astronomy, underwater, landscape and professional-imaging interests. It captures distinctive ‘fisheye’ perspectives with the viewing angle of a 16mm lens (35mm equivalent). 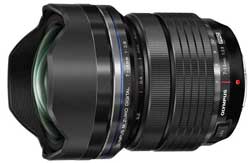 High optical quality at wide apertures facilitates handheld photographic freedom when combined with an Olympus camera body that has the Olympus 5-Axis Image Stabilisation, such as the professional OM-D E-M1 and the E-M5 Mark II. The lens weighs 534g.

Both lenses are environmentally-sealed against dust, water and the freezing cold (to -10 degrees Celsius). Olympus ZERO multicoating (Zuiko Extra-low Reflectance Optical) is applied on all lens surfaces of both lenses to effectively suppress ghosting and flare.

They are expected in late June, with retail prices yet to be announced.