The AF-S Nikkor 24-70mm f/2.8E ED VR uses a combination of one aspherical ED glass element (a first for Nikkor lenses) aspherical lens elements, ED glass elements, a HRI (High Refractive Index) lens element, and ‘Nano Crystal Coat’ for superior optical performance with suppression of ghost and chromatic aberration, as well as sharp, clear rendering all the way to the edges of the frame. It delivers, according to Nikon, better resolution and softer, more natural blur characteristics than its predecessor.

A fluorine coat on the outer surfaces of the front and rear lens elements repels water and oils, and makes cleaning the lens easier when it does get dirty

In addition, it is equipped with a VR for an estimated 4-stop increase in shutter speed.

The AF-S Nikkor 200-500mm f/5.6E ED VR is a 2.5x super-telephoto zoom lens equipped with a VR function equivalent to a 4.5-stop increase in shutter speed. It is also equipped with a Sport VR mode, which enables effective photography of athletes and other subjects that move quickly and unpredictably.

An electromagnetic diaphragm mechanism enables stable exposure control with high-speed continuous shooting for comfortable hand-held shooting that captures the decisive moment as a bird flaps its wings, or of an airplane in flight. 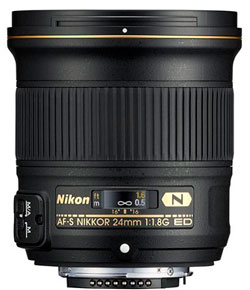 It has a minimum focus distance of 23cm, enabling close-ups with pleasing blur characteristics for a three-dimensional look and feel.