‘If a tree falls in a forest and no one is around to hear it, does it make a sound?’ – While this hoary old Philosophy 101 question is beyond the scope of a humble trade website to address, it’s self-evident that when a photo store closes, and know one knows about it, it nonetheless diminishes the photo specialist channel. 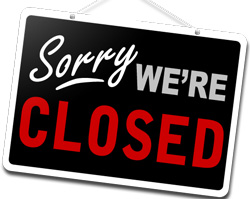 Over the past year or so, well over 20 photo stores have closed in Australia and New Zealand. As John Swainston notes in an excellent opinion piece in this issue, it’s been more or less this way for the past decade. It’s simply that as an industry facing tough times, the instinct of our industry leaders has been to ignore the negative and accentuate the positive. Who knows whether the past 6 – 12 months have been better or worse than the period immediately before? We simply don’t have the data. (We don’t have any meaningful local marketing data any more!)

So how many trees fall before it’s no longer a forest at all? How many photo stores close before the specialist channel ceases to attract the necessary support of suppliers? As a businessperson with ‘skin in the game’ – each store closure is a nail in the coffin of a website dedicated to the photo specialist channel – this is a question which has been bothering us here at PhotoCounter for the past couple of weeks.

Some of the people who have closed stores are still in business. So for instance, XpressImage has opened a new outlet in Point Cook now called Imagexpress, while the proprietors of Reflections in Time have acquired Borg’s Photographics in Moonee Ponds (from Anna Borg) and The Photo Stop acquired Airport West Kodak Express.  .

– And it’s an ill wind that blows no good. So for example,the closure of Paxtons in Brookvale presumably increases the potential customer base for Spectrum Camera House in Warringah Mall.

We are unable to provide a clear picture of the situation at Camera House as management there was unwilling to volunteer details. However, according to the Camera House website, there are 61 Camera House stores around Australia, plus a group of affiliate (non-branded) stores such as the Paxtons group. Two years ago we reported there were 78 Camera House stores and around 20 affiliated outlets.

‘There are many cases, especially in our group of stability, strength and growth, where the stores that have left us are in fact still trading, but perhaps not under our brand,’ said Camera House general manager, Paul Shearer.

He emphasised that Camera House had experienced solid sales growth over the past two years, even with a smaller number of stores.

‘The Camera House group of retail stores is a progressive, ambitious organisation where quality of retail versus quantity is the most important sustainable model, and we have these things nailed at our retail stores.’

There has also been a contraction of CE outleets offering photo services – possibly a plus for photo specialists? Leading CE retailer, the Noel Leeming Group has decommissioned its Frontier labs in Riccarton and Albany, with a further 10 Noel Leeming stores purchased b y the Warehouse Group also now out of on-site photo services, which also abandoned photo in its other outlets when HP closed down its retail photo business.

An industry insider told Photo Counter, ‘Kiwis can survive on the smell of an oily rag so there are not as many store closures as you might expect. Many of course are only eecking out a living.’

We were also saddened to hear that legendary Norfolk Island retailer Ken Nobbs, who has run his successful Cameralines store for 48 years, was about to pull the plug.

‘After 48 years the going is getting so tough the tough has – almost – had enough,’ he said.

‘We have split the shop down the middle with photographic stuff down one side and – wait for it – women’s clothing down the other. Needless to say, the women’s side is keeping the shop open.’

– But is certainly isn’t all gloom and doom across the ditch (and nor is it in Australia): ‘Innovative photo retailers dedicated to prints and allied support services from mobile devices are upbeat,’ our NZ corespondent wrote. ‘And Snapshots Cameras is setting up a showcase shop in Hamilton.’ (More on that in a forthcoming issue.)

PhotoCounter received several contributions from readers after flagging the intention of running a story on this topic.

One was from Jim Schultz, formerly proprietor, with his wife Jenny, of Classic Photos in Perth:

‘Classic Photos at Armadale Shoping City closed down two years ago, after 21 years with the same owners/operators. We paid out everyone to the last cent, but in doing so, we had to re-mortgage the family home to the tune of $150K, which we will hardly catch up with in our remaining life spans.

‘We cite corporate greed, unfair competition from corporates, uncaring and crooked politicians; in particular Colin Barnett’s anti-democratic 24/7 Trading Rule that he introduced against three referendums to the contrary.

– The scenario outlined above is a familiar one. Long-term, hard-working photo specialists looking towards retirement hoped to be able to on-sell their businesses and head up to retirement on the Gold Coast or wherever. The sad reality is that few photo stores are being sold as going concerns. Store owners find themselves trapped in a business which has ‘stopped giving them any love’, or otherwise sell up at a loss, or worse.

And when a small business goes into liquidation, it further weakens the photo retailing infrastructure by leaving Australian-based second-tier suppliers who are also often doing it tough, to cope with a loss. The opposite of a win-win situation.

The apparent lack of concern from some of the major (first tier?) suppliers about the predicament some of their dedicated photo specialist customers are in is hard to fathom unless it suits their ‘go to market’ strategy to minimise their distribution network.

Richard Robertson was one (sadly missed) industry leader who saw this coming and went against the grain in articulating a sobering warning to his colleagues regarding exit strategies and succession plans.

This is what he told PhotoCounter in 2011: ‘My advice to anyone who owns a business today, especially the mums and dads of the world, is: Do not sign a new lease until you’ve done some serious five-year planning and also look around for a better opportunity as far as rent goes.

‘If you are a small, independent retailer now coming up to a rent review you’d have to have absolute rocks in your head to sign up for another five years. The best you could do would be sign up for another one or two years and see how it goes, but I predict that within the next five years we’ll see a very rapid exodus of speciality retailers in a whole range of areas, for all those reasons we’ve spoken about.’

And again when we spoke to him early last year following his retirement: ‘I think what people have to do today is ask yourself “where am I going to be in the next 5 – 10 years?” For some that will mean using all those great attributes and skills that you’ve learned gouging out a living in the photo specialty trade and turn it to another trade.’

Alan Lane, who has survived and prospered in the cut-throat Elizabeth Street precinct in Melbourne, elaborated on the key to his ongoing success: ‘I have just turned 30 years at Camera Lane and March this year was my best month for 30 years but the reason is I am a Real Camera Store, meaning family-owned and run by myself, wife and son. While any other store in Melbourne has only commission-driven staff , we have a first-name customer base and comfortable service to make them feel important and at home.

‘We also have a workable website and popular Facebook page, we are the only one in town with a working second hand department, selling film cameras for students to learn the basics of photography.

‘As well as the second hand section, we also specialise in high-end products: We are a Leica A dealer, Nikon Pro dealer, serious Fuji & Olympus stocker.’

Canon? Not so much: ‘They are available at washing machine shops and online Hong Kong dealers well below what Canon can offer me. Canon look at turnover shops not independent real camera stores.’ He noted that small photo retailers are on a three percent rebate while ‘JB’s & Harvey Norman are on 15 percent.

‘Luckily we have never been in the D&P business as that’s a lot of work for not much profit.

‘So independent camera stores are not dead – it’s all in the way you run them and communicate with the wholesalers.’

‘…Also, we are the owners and answer the phone and can do a deal then and there, we don’t have to ask the boss.’