Sony’s latest action camera, the FDR-X1000V, lays down the gauntlet to GoPro, matching the top-of-the-line GoPro Hero Black in 4K video capability, and trumping it with its SteadyShot image stabilisation feature. 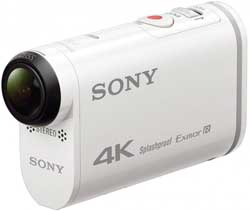 The X1000V, announced at CES 2015 captures video at 4K resolution at 30 frames per second, and delivers 8.8 megapixel stills in Photo mode.

Camera shake is obviously a critical issue when cameras are mounted on bikes, helmets and the like, and Sony’s heritage in video technology gives it a real edge which GoPro will find it difficult to match.

The electronic image stabilisation in the X1000V has reportedly been further improved to better address the low amplitude vibrations associated with drones without mechanical stabilisation.

While there are no local release dates, the new cameras are shipping in the US in February for US$500 and US$300 respectively.