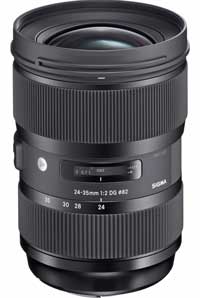 (‘Market-disrupting’ because to date the made-in-Japan Art series lenses have been widely reviewed and bench-tested as equal or superior to their Canon and Nikon equivalents, but at a fraction of the price – with the pricing differential particularly marked in Australia.)

Sigma says this is the world’s first full-frame zoom lens with an f2 widest aperture. It effectively delivers three fast primes – 24mm, 28mm, and 35mm – in one unit. Aperture range is f2 – f16. Closest focusing is to 11-inches.

The body of the 24-35mm is made of a ‘thermally stable composite’ and the barrel has a focus ring for manual override of the Hyper Sonic Motor-driven AF.

A lens hood is included, fitted with a rubber connection for a secure fit.

The lens will be locally available in August, according to local distributor, CR Kennedy. Pricing has not been announced.