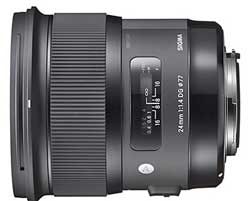 ‘Market-disrupting’ because the Art series lenses offer equal or better performance, according to local and overseas reviews, to the premium Canon and Nikon full-frame compatible lenses at a price both enthusiasts and professional photographers can countenance. For instance, the Sigma Art f1.4 has an RRP of $1049 while the Canon 35mm f1.4 L series has an RRP of $2179 and the Nikkor f1.4G is $2199. But we digress…

The Sigma 24mm f1.4 Art lens is designed primarily for full-frame DSLRs, but can also be used with APS-C sensor DSLRs, where it covers a 38mm focal length. It incorporates both FLD glass and SLD glass in a design of 15 elements in 11 groups to minimise chromatic aberration, especially around the edge of the image field. Aspherical elements at the rear of the lens improve wide aperture performance.

The new lens incorporates the full-time manual focusing mechanism introduced on the Sigma 50mm Art, which switches to manual focusing by rotating the focus ring, even when AF is being used. This allows the photographer to make focus adjustments quickly and easily.

As with all new lenses under the ‘Sigma Global Vision’ categories, every 24mm lens will be tested using Sigma’s own MTF measuring system in the company’s factory in Japan.