Consumers abandon online
A survey of Australian and New Zealand consumers by Pureprofile for server giant Rackspace indicates that there won’t be tumbleweeds rolling through your local shopping centre any time soon.

Nearly a third (29 percent) of the over 1000 consumers surveyed (online) have given up entirely with online shopping and have returned to the bricks and mortar experience.

Almost half of the 1000 shoppers surveyed have abandoned a purchase after experiencing frustrations with a website, while 47 percent have gone to a different website to purchase the same product.

Forty-four percent thought traditional retail outlet shopping was actually quicker if they knew what they were looking for, and 43 percent preferred the service they received in-store.

Convenience,  nonetheless,  is nominated by 83 percent as the reason they shop online, and 54 percent said there was more variety online.

The top three frustrations experienced with online shopping were:
– Too many pop-up advertisements (42 percent);
– Service online is not the same as in-store (34 percent);
– Too time consuming to narrow down options available (28 percent). 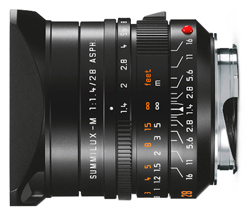 The wide and fast Summilux-M 28mm is ideal for photojournalism, architecture and landscapes. Its optical design features 10 elements, one of which is aspherical. The optical system features a floating element to ensure high imaging performance at close focusing distances.

The lens is assembled completely by hand, according to Leica, and for $8000 you get an all-metal lens hood thrown in.

Thumbs up for digital signage
Good news and bad news: A report by IDC in the US indicates that digital signage is set to grow rapidly over the next two years, with over four out of five companies surveyed which are currently using digital signage ‘very satisfied’ with the technology.

If you’re a retailer thinking of investing in digital signage this inspires confidence. If you use your wide format printer to knock out signage for local businesses. the news is not so welcome.

The IDC study found digital signage is already disrupting the large-format printed sign market and the broader printed signage market is likely to be threatened in the future.

The report, snazzily titled ‘Survey Analysis Shows Notable Transition to Digital in the Signage Market Within Two Years’, is based on surveys of US businesses conducted late last year.

A recent survey of printers and graphic designers by FESPA, the European screen printers’ association, supported the findings on digital signage, with more than three quarters of the more than 1000 international respondants expecting live media and LCD screen advertising to impact the wide format business in the foreseeable future, with 36 percent of respondents stating that these technologies are already impacting the business.

Almost a third of those surveyed plan to offer digital signage solutions to their customer base in the next 12 months.

The figures come after Samsung released two wide screen TVs aimed at the smart signage market in Australia during March. They can be divided into multiple areas independently showing TV content, video, images or text.

Olympus upgrade from sea to the stars
Olympus has announced firmware updates that will be available in June for its flagship Olympus OM-D E-M1 and E-M5 Mark II cameras, adding features for underwater and astro-photographers.