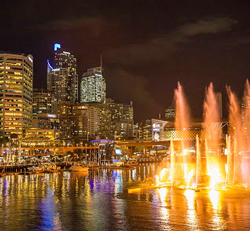 Canon will locate at the Museum of Contemporary Art for a series of photo-oriented activities:
– Renowned travel photographer Rchard I’Anson ‘has curated an exclusive Vivid trail of some of his favourite installations’. He provides photography tips through the free Vivid Sydney App;
– Canon Collective walking tours – with Canon EOS 70D in hand and a free A3 print on conclusion;
– Roaming Canon Photo Crew – Those who find themselves at an installation and unsure how best to capture the action can seek out the roaming Canon Photo Crew for coaching tips.
– Photo Marathon – A brief will be issued creating a unique challenge. Entrants will have two hours to take pictures around the city before returning to print one submission.

Nikon sales down, outlook up
Nikon’s sales are down 14.5 percent and profits 11.8 percent for the 2014/15 financial year, which ended March 31. Nikon attributed the result to ‘delayed market recovery,’ mainly in Europe and China.

Nonetheless, Nikon was upbeat about the immediate future, noting strong sales of the D750 and D810, among other models. It predicted an uptick in the second half of the year.

Lily Robotics has unveiled the Lily Camera, a self-flying drone designed to autonomously track and record its owner. Just chuck it into the sky and it begins following and recording its target, which is anyone in possession of the accompanying GPS tracking device. Minimum altitude is 1.75m. The camera captures 1080/60p HD video and 12-megapixel stills. And don’t be thinking that you can escape it by jumping into the river – its waterproof to 1 metre.

A companion app offers some control over Lily’s in-flight behavior and shot composition, but the drone basically flies itself without human input. The battery is only good for around 20 minutes of flying time and requires two hours to fully recharge.

A brilliant gift for the narcissist who has everything (there are no doubt more practical applications, but none come to mind), the drone/camera is available internationally for pre-order now for US$499. It will rise to US$999 once it hits the market.

‘Wearable camera adoption will be strongest in areas where there is a clear and specific use case or context in which the camera is used,’ says Tractica research director Aditya Kaul. (In ordinary person language this probably means that people will use them when they have a reason.)

‘While GoPro is driving the market for sports and adventure enthusiasts, we expect usage of consumer lifelogging cameras like those from Narrative to mature over time to capture specific moments and support video streaming.

‘The public safety sector is also experiencing growth in the adoption of body-worn cameras for police officers provided by companies like Taser, Vievu, and Digital Ally.’

DSLR in your pocket
There’s a whiff of snake oil to this one, but here goes: Palo Alto-based ‘technology start-up’ Light is spruiking a photographic system, but not as we know it.

Here’s a description of the system from MIT Review: ‘Light aims to put a bunch of small lenses, each paired with its own image sensor, into smartphones and other gadgets. They’ll fire simultaneously when you take a photo, and software will automatically combine the images. This way, Light believes, it can fit the quality and zoom of a bulky, expensive DSLR camera into much smaller, cheaper packages—even phones.

When you take a picture with a Light camera it’s taking several pictures at the same time from slightly different perspectives…It comprises an array 16 camera modules with focal lengths of 35, 70, and 150mm .The level of zoom that the user selects determines which modules will fire when a picture is taken, and where the mirror contained in each module moves to capture light. The resulting shots are then digitally combined in a way that emulates a much bigger camera lens.

Light is still in the early stages. It doesn’t even have a prototype to show, let along proof of DSLR-like quality. Nonetheless it’s talking about building 52-megapixel cameras into smartphones some time next year.

‘The system will enable people to easily carry a small, single device that offers true optical zoom with no protruding elements (we are currently prototyping 35mm-150mm), capture low-noise images even in low-light situations, and control depth-of-field and focus as part of the editing process,’ Light co-founder and CTO Rajiv Laroia told tech website, The Daily Dot.

– Did someone say Disc Camera?

Sony sensor supremo
Sony is the clear Numero Uno in the image sensor business, with an overall market share of 40 percent – up from 35 percent last year, according to Techno Systems Research Co.

Sales of Sony’s image sensors – which are used in the lion’s share of digital cameras and high-end smartphones, including Apple’s iPhone – jumped up 20 percent from 320 million units to 450 million units, and the division brought in 16.5 percent more revenue and a 36 percent higher operating profit. In fact image sensors, along with Playstation sales, were the heroes in Sony’s 2014 financial report (although the company still announced a $1 billion-plus loss.)

And it intends to maintain its dominance of the image sensor business. In an interview with the WSJ, Sony CEO Kazuo Hirai said: ‘I think one of the things we certainly pride ourselves on with our image sensors is our commitment to stay at least several years ahead of the competition and to make sure that we make the heavy R&D investments to make sure that we are there, ahead of the competition.’