Canon’s compact sales are down nearly 70 percent since 2008 – the year after Apple Inc released its iPhone.

Canon lowered its 2015 forecast to 7 million compact cameras from 7.8 million, or 23 percent less than 2014. It is projecting sales of interchangeable lens cameras at 5.8 million rather than 6.4 million, representing a 9.4 percent decline against 2014. 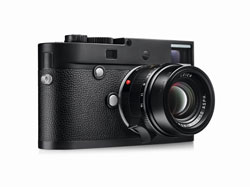 New features include a high-performance Leica Maestro image processor and a buffer memory expanded to 2GB.

It has a full-frame 24-megapixel black-and-white sensor without a low-cut filter. In addition to the M-Lens portfolio, almost all lenses of the Leica R series can now be used on the Leica M Monochrom via a dedicated adapter

The camera body is manufactured from a high-strength magnesium alloy and the LCD screen is scratch-resistant and ‘almost unbreakable’. 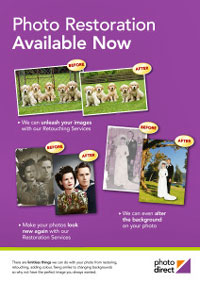 Photo Direct has announced that its photo restoration service will run at least two days faster, promising a turnaround time of three to five days on all jobs.

The speedy new turnaround time means that Photo Direct account holders can still promote the service in-store for Mothers Day, which you had better not forget is on May 10.

The service started in 2006 and is available to photo retailers, framing businesses or print/copy centres that have signed up to a free Photo Direct account.

There’s no upfront cost associated with the restoration service – shops only pay once the job is sent back to the store for printing, Photo Direct says. All it asks is that the service is promoted in-store by printing one of the downloadable poster files in the ‘Marketing Materials’ tab on the Photo Direct website. (Or feature the service in blogs, e-newsletters, etc)

Samsung drops market share despite smartphone success
In the first quarter of 2015 Samsung regained the number one position in smartphone sales from Apple, despite its market share dropping to 24 percent from 31 percent a year earlier.

Both companies were tied with shipments in the fourth quarter of 2014, with 74.5 million smartphones each, according to Strategy Analytics.

Despite Samsung leading the charge in shipments, its financials haven’t experienced a boost, with revenue in its mobile division down by a fifth and operating profit dropping 57 percent.

Overall, the report says that ‘global smartphone growth’ has slowed to 21 percent from 33 percent due to ‘increased penetration and maturity of key markets’ in China, US, and Europe. 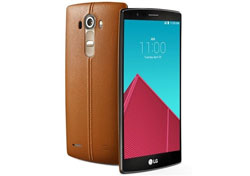 The latest Android smartphone by LG is equipped with two powerful cameras, ideal for those wanting ‘professional-like’ smartphone cameras that can take ‘epic selfies’.

The G4 rear-facing camera boasts a 16 megapixel camera with a f1.8 lens. And the front camera – the one used for selfies – is 8 megapixels, with a ‘Gesture Shot’ function which takes a photo when a ‘simple hand gesture’ is made. Pick a hand gesture…any hand gesture….

The camera also has ‘Laser Auto Focus Technology’ that allows the smartphone to be more responsive, and a 5.5-inch display to view them on. It will be available in June, with no price announced.

Many marketing research companies speculated that this was the reason for declining iPad sales, but it has taken until now for Apple to admit it. Apple CEO Tim Cook said in a phone call with investors and media that ‘we’re clearly seeing cannibalisation (in iPad sales) from the iPhone, and on the other side from the Mac.’

‘One of the major reasons we expect to see the cellular tablet connection growth slow down over the next couple of years is the cannibalisation by larger smartphone screens,’ he said.