Green shoots?
The relentless downward trend in global camera and lens sales seems to be showing the first signs of levelling out in the April Camera and Imaging Products Association (CIPA) figures.

Vistaprint dumps photo gift wholesaling
Vistaprint has dropped its Australian trade printing operation, TradeAdvantage less than a year from its launch last September, due to a lack of interest from printers.

Vistaprint was offering a range of services which would have brought trade printers closer to the photo retail printing market – photo books, calendars, T-shirts, mugs, etc – from its premises in Deer Park, Melbourne. 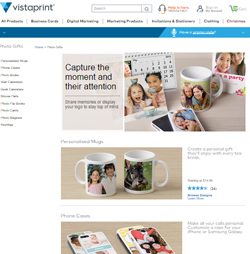 Vistaprint launched TradeAdvantage promising that it would open new markets for zero investment to printers and that ‘margins could easily be 50 per cent or more up to 200 per cent’.

The service was to enable printers to resell more than 120 photo gift-type products in runs from one to 20,000, as well as the usual business cards and flyers.

Vistaprint has similar supply arrangements with Staples and FedEx in North America, and has a joint venture with Japan’s largest chain of photo print stores, Plaza Create. The Australian version just hasn’t worked.

Most people like shops
Are online shoppers the most market-researched group of consumers in the history of market research? A week doesn’t go by without a few new insights into their behaviour from some landmark study or another.

Latest is from internet hardware/software giant Oracle; Retail Without Limits – A Modern Commercial Society. The report is the result of a survey of 500 participants from each of 10 countries—Australia, Brazil, China, France, Germany, India, Japan, Russia, the UK, and the US.

These are key findings from the little Aussie battlers who responded:
– 65 per cent of respondents have reservations with retailers gaining access to information on their shopping habits, and 61 percent want to engage with an assistant in-store.
– 74 percent of respondents want visibility to stock and 61 percent believe that access to information across digital and store channels benefits their experiences most.
– 67 percent of respondents have purchased goods from offshore international retailers because of a better price (77 percent), access to a product unavailable in Australia (47 per cent) or to a better range (40 per cent).
– 50 percent of respondents say their loyalty is influenced by a convenient shopping experience across channels, while 53 per cent are influenced by local and convenient stores.
– 69 percent prefer buying goods in store and currently shop more frequently in store than online, providing local retailers with the opportunity to differentiate themselves from pure-play counterparts. Myer and Coles were named as the favourite local retailers, followed by Kmart and Target.
– 54 percent stated that converged commerce was key to enhancing their shopping experiences. Sixty percent of consumers are shopping more using mobile, 48 percent are using tablets more and 46 percent are using social media more.