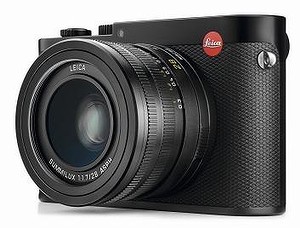 Camera manufacturers are, let’s say, exceedingly opaque about where they source their sensors. (Unless they are Sony, of course.)  Leica won’t reveal which company supplied the sensor for the recently announced Leica Q, forcing people who care about these things into stupid guessing games. (My guess is Toshiba.) Imagine if a car manufacturer refused to tell the world where it was sourcing its engine technology…

But that’s not important right now, as they said in Flying High. What’s more interesting is a point made by Terry Lane in a review of the $6000, 24-megapixel Leica Q published in a bunch of Fairfax newspapers and websites about purchasing a premium digital camera:

‘When Leica aficionados paid over the odds for their 35mm film cameras they justified the purchase by telling themselves that the camera would last forever and become a valuable heirloom…As soon as the36-megapixel Q2 arrives in the shops the Q will be obsolete.

‘Digital cameras are not good investments – it is unlikely that any digital model will ever become a classic like, say, an M6. It is painful to think of the Q as future landfill.’ (Ouch – let’s keep this to ourselves, OK?)

Sony swaps shares for sensor superiority
And talking of sensors and premium cameras, Sony seems determined to maintain its dominance of the image sensor market, this week announcing that it will raise US$4 billion for ‘increasing production capability of, and research and development for, stacked CMOS image sensors.’

This is the first time in 26 years the company has issued new stock, a clear sign that image sensors – along with gaming consoles and mobile – are front-and-centre in the consumer electronic giant’s plans for the future.

Sony made 40 percent of all sensors sold in 2014. It is increasingly using its competitive edge in sensor technology in new camera models, with the most recent releases – the Cyber-shot RX100 IV and RX10 II – featuring ‘stacked’ 1-inch sensors which are well ahead of the pack.

It supplies (some, not all) sensors to competitors such as Nikon, Canon and even Leica.

Photoflex reborn
Photoflex lighting products rate highly with pro photographers so when the company suddenly turned up its toes in April, after 30 years in business, it was met by a rending of garments and gnashing of teeth by some, including long-time local distributor, Borge Anderson.

Now Photoflex has been brought back from the funeral parlour alive and kicking, having been acquired for an undisclosed sum by PromarkBRANDS. (Is it just me being an old codger, or do other people find brands which suddENLY break out into capITALS a tad annoyING?)

‘Together, PromarkBRANDS and Photoflex will bring greater focus to delivering high quality and industry-defining lighting solutions for photographers of all skill levels,’ read the announcement.

Photoflex will continue to develop its own lighting gear for the photography industry and the Photoflex brand will continue. (But maybe updated for the 21st century as photoFLEX?) The parent company’s other brands include Photogenic, Norman, Smith-Victor, Speedotron, Quantum, Cool-Lux, Logan, and Dot Line Corp.

End of the line 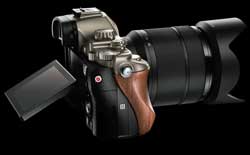 Hasselblad has promised the world that it won’t make any more of those tizzed up DSLRs in collaboration with Sony. The last will be the Hasselblad Lusso – a Sony A7R with a wooden hand grip (pictured left), which will be sold in very limited numbers in Asia. And that will be that.

In an interview with Amazon’s camera sales promotion website, DPReview, newly-appointed Hasselblad CEO Perry Oosting said, ‘It will not be sold elsewhere, and there will be no more units made. In fact, we can’t make any more, and as our Italian design studio is now closed we won’t be making any more products along these lines in the future.’

There will doubtless be quite a few Hasselblad fans who will be comfortable with that decision.

But perhaps the Lusso and its predecessors, the Lunar and the Stella, contradict Terry Lane’s assertion that digital cameras aren’t likely to hold their value. The sheer rarity and oddity of the Hasselblad/Sony hybrids just might see them command big dollars in the future…

More camera awards
Winning products for the Camera GP 2015 are the Canon EOS 7D Mark II – Camera of the Year and Readers’ Award, and the Canon EF 11-24mm f/4L USM, Lens of the Year. The Editors Awards went to the Lytro Illum, the Olympus OM-D E-M5 Mark II, and the Panasonic Lumix DMC-CM1 smartphone.

KMart in menage a trois
One thing we missed on our report about the long engagement between KMart and Kodak Alaris is that Snapfish is still supplying the KMart online channel for photo services. Wonder how that works? 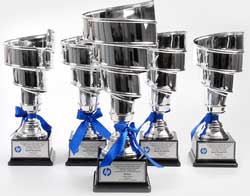 In May, at the Australian Printing Industry Awards, Nulab took out the top prize for printing photo books in addition to the Curries Prize for ‘Brilliant Images in Print’.

Following this success Michael popped over to Singapore to pick up five prizes from HP for photo book printing in the Asia Pacific/Japan region. Go Indigo go!