Manfrotto announces baby BeFree One
Manfrotto has announced the BeFree One, the most compact travel tripod in the BeFree range so far.

Weighing just 1.3kg, the new aluminum model uses 4-section legs to collapse to just 32cm from a maximum height of 130cm. It comes with an aluminum ball and socket head and is capable of supporting up to 2.5kg.

Manfrotto says ‘the BeFree One is ideal for those who want to take along a tripod, without worrying about weight and size.’

The made-in-Italy BeFree One has a two-section center column, clasp leg locks and the head is fitted with a quick release plate. It comes with its own padded carry bag: its extra padding protects the tripod from any accidental damage.

Distributed by Adeal, the BeFree One will be available from January at an RRP of  $279. 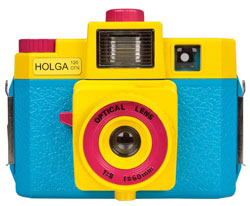 The Chinese factory that produces Holga Cameras has ceased operations, spelling the end of the beloved ‘toy’ camera range.

Holga cameras were made from 1981, introduced to China as an inexpensive medium format (120) film camera. But the all-plastic marvels later developed a cult following in  the west, along with Lomo and Diana cameras, which grew even stronger in the digital era. The technical flaws in each photo caused by cheap plastic lenses and light leaks became a thing of great coolness.

It could be argued that there is a lot of Holga in the DNA of Instagram – both the square format and the of-kilter filters being resonant.

Word from the factory in China in that, ‘…all Holga tooling has already been thrown away and there is nothing available for sale.’

So if you want a souvenir of the hippest camera in all of hipsterdom, grab a Holga from remaining shelf stock.

Panasonic out-Lytros Lytro
Panasonic last week released a free software download for its Lumix GX8, G7 and FZ300 cameras that will enable users to ‘post-focus’ – select where the plane of focus is, after the photo has been taken. (The upgrade for the GH4 is coming early 2016).

The new ‘post focus’ mode captures all possible focus points from foreground to background when the camera’s shutter is pressed. It is ideal for close-up shooting in macro and food photography as well as portraiture. It also provides greater flexibility for deciding the best focus point when recording fleeting moments. Photographers simply take the shot, review it and select their preferred focus point. During playback they can access adjustment tools like Focus Peaking and 5x magnification to fine-tune the selection process.

According to my colleague Margaret Brown, reviewing the technology in Photo Review, it’s better than Lytro at this post-focussing business: ‘Panasonic’s system is much simpler and cleverer than the pan-focusing systems developed by Lytro back in 2011 and more recently by Light (which put 16 micro-cameras with different focal lengths in a single body). It also utilises functions already available in the latest cameras – without compromising any of the camera’s capabilities or performance.’

The software download is available from the Lumix Global Customer Support Site:

Meanwhile, Lytro has rushed to stay relevant with an announcement that its latest Desktop 5 upgrade turns Lytro cameras into a ‘virtual green screen’ system.

Lytro DepthFX claims Lytro, makes chroma-keying for background replacement unnecessary and enables depth-based adjustments like exposure, contrast and saturation. ‘Easily change the background of an image by selecting a depth layer and replacing it with a new image – essentially rendering the use of green screens unnecessary – while keeping the interactivity and advantages of a living picture.’

The Lytro Desktop 5 update will be available from December 8.