Great Leap Forward for PMA
PMA has a new logo.

‘Keeping up with all the other great leaps forward at PMA over the past few months, the PMA logo has been redesigned with a sleek, more modern look that represents the organisation’s strategic direction and focus on innovation and education,’ it explained to PMA members.

‘In looking to better reflect PMA’s international reach and community, a globe icon was incorporated while at the same time encompasses digital imaging through the square images. The half circle or “swoosh” on the left brings together our community/members with the photographic imaging business. We’ve incorporated a bright blue colour to represent security, authority and trust, and green to represent increased sales and revenue.’

Writing without light
It looks like winning the megapixel race just wasn’t enough for Canon, which claimed the edge with its 50.6 megapixel EOS 5DS earlier in the year. 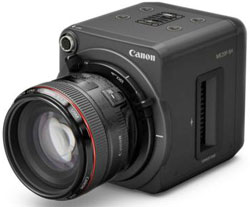 The 35mm full-frame CMOS sensor camera will be available in December, and is targeting a niche area of the market – very niche with its US$30,000 price tag.

The ME20F-SH can shoot full HD video, which will come in handy for ‘nighttime surveillance and security, cinematic production, reality television and nature/wildlife documentaries’.

Hang on a sec…
Sony Mobile has launched a ‘86,400 photography competition’ for the Asia Pacific region – 86,400 apparently being the number of seconds in a day.

“We’re excited (shouldn’t that be “we will be excited”?) to see the collage of moments that will emerge from different perspectives across the Asia-Pacific region.  Now, more than ever, people are using their smartphones to take pictures, but what kind of images are they capturing? What trends will we see?” said John Featherstone, from Sony Mobile Communications regional head office.

The search for 86,400 extraordinary moments will run until August 29. Winners will be chosen based on the highest number of Likes for their photograph – and will win a Sony Xperia C4 Smartphone.

An overall winner will also be selected by Sony to win the major prize of a trip for two people to Tokyo, worth up to $15,000.

Olympus back in black
Olympus’ numbers for this quarter have been released, and after a couple of ordinary years following its corruption scandal, it is doing nicely again.

Olympus has enjoyed a 26 percent increase in mirrorless camera sales year-over-year. Compact camera sales have dropped 11 percent (which isn’t a bad result considering the compact market has tanked). Olympus says sales revenue has remained steady as consumers have been purchasing high end models. (There’s also the matter of a currency exchange, but hey!)