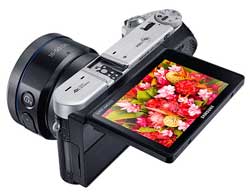 Users can tilt the 3-inch display 90 degrees and rotate it 180 degrees. The screen is 1.04 million dots AMOLED.

Supporting 4K UHD video recording, the latest HEVC (H.265) codec compresses high quality video to approximately half the file size of H.264 footage. Still UHD images captured from Interval Capture mode can easily be converted into a UHD time-lapse video in camera, without the need to transfer images to a compatible PC first.

Using NFC, users can simply tap their compatible smartphone or tablet with the NX500 to transfer their favourite high-quality images onto their compatible mobile device to share on their social media networks.

The NX500 has the nifty’ Auto Shot’ mode from the NX1 which tracks movement and allows the camera to take fast action shots at particular moments – the moment the ball leaves the foot, for instance.

The NX500 also shares the 205-point phase and contrast Hybrid AF system with the NX1, and users can capture a burst of full-resolution images at 9 frames per second – pretty impressive for a 28-meg camera.

– All in all, it makes that viewfinder on the NX1 seem pretty darned expensive, don’t it!